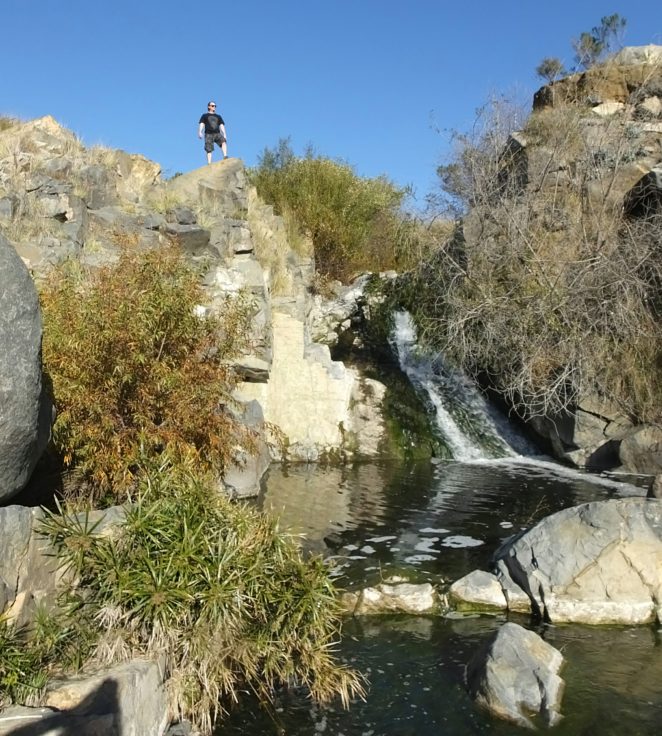 These falls sit on the border of two towns, Oceanside and Carlsbad, in San Diego County California, are not open to the public. They were a cultural and spiritual center for the Luiseno Native Americans. The California Native American Heritage Commission has registered El Salto Falls as an official Native American Sacred Site.

The village used to sit just west of the waterfall. A diary written by a member of Gaspar de Portola’s expedition to San Franciso in 1769 mentions the falls and encounters with Native Americans near here. But during the last 40 years the what was once a natural beauty was turned into a rock quarry that has carved away the hillsides on each side of the falls destroying artifacts.

Now there are 500 to 600 houses going in to the east of the falls, where dinosaur bones were just discovered. Being here is like stepping back in time, but I feel a great sadness.

The falls used to be 40 feet tall, now only 15 to 20 feet, partly due to a major flood in the 80’s and of course the rock quarry next door kept dumping rocks into the bottom pool. Anyway, here are some photos taken there. The water fall is several falls in one, as it steps down to the 20 footer.

The one below is the one I chose for the cover and it shows my oldest “grown” son at the top.

We have a water ways act that now protects all of the natural waterways in California. Hopefully this will protect the falls from the future.

Okay, I might as well start this journey from the top tier of this fall where you see a  quiet creek with my youngest son going across “the bridge” and the dogs with Maggie Mae (in red) noticing the water is picking up movement here and getting faster. We are on the Carlsbad side of the falls. East side.

Penny, my moms dog notices the water is getting more swift as well.

The edge, the dogs are always very careful.

For a dog that weighs less than five pounds she is amazing. She’s like a little mountain goat.

Look closely at the next one, can you spot Penny? She made it to the other side without getting wet and I still got my reflection photo. lol

Of course she had old Maggie Mae to teach her the ropes.. What good is a hike without dogs!

A different angle without the dogs. See the rock bluff face on the left? The trail runs out here, time to cross the creek.

Crossing the creek into the Oceanside side (west side of the creek) and looking down, not all is what it seems. It wasn’t a drop off at all as you can see in the shot below, but a bunch of mini falls.

Where the water swirls and goes around the rocks, it is mesmerizing. Look closely at the one below, hahaa, dogs have already been here. How can I tell? Look at the wet rocks on the bottom right frame.

I picked my way down to the biggest tier which is in the next post. If you enjoyed these check out the main waterfall at El Salto Falls, Carlsbad and Oceanside California coming soon.