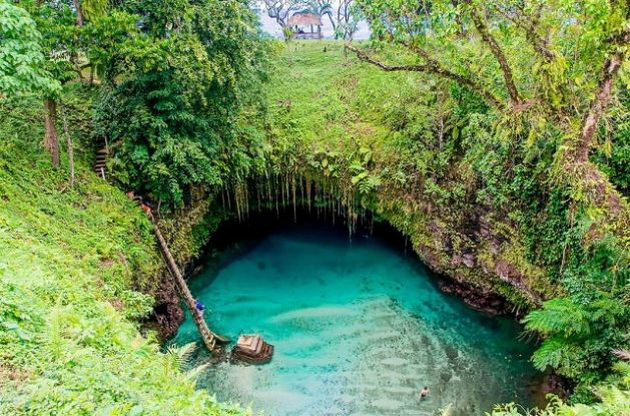 When it comes to planning a summer vacation, there are several perfectly sunny places that just dominate on all the lists. And although they are wonderful, but sometimes like its not enough.

If you want unusual locations and places with the best natural swimming pools in the world, then we suggest you take a look at this list:

Giola natural stone pool is located on the shore of the island of Thassos in Greece and is known as “the tears of Aphrodite.” Legend has it that Zeus made the pool for his mistress Aphrodite and shaped in the form of an eye to be able to keep an eye on it.If you want to visit this incredible pool, then you need to really do our best – provide a vehicle which can bear the roads full of dust and bumps and certainly pack enough water to stay hydrated.

These bizarre pools in a figure 8 hidden Royal National Park in Sydney, Australia. Although seem to have been made by human hands, the formations are completely natural to them can only be reached after a difficult path through the dense forest. If you decide to visit, check the tides.These pools can access only when there is low tide when nearby ocean is calm. Be careful, because of one of the waves were injured more than 50 people swimming in pools.

3. “Hierve El Agua”This rock-like mineral waterfall looks like a fast white water frozen in time. This wonderful phenomenon was formed due to water rich in calcium which runs through the mountains and underground caves.Although it is an illusion (since formation resembles a waterfall) however those who are fans of adventures can bathe in the hot thermal pools at the top of the rock. If you want to be alone, then visit the morning when no one, because during the day can create a big fuss.

Krka waterfalls and those of the National Park Plitvice are very familiar to fans of travel, but according pretpostavuvanjata this hidden oasis in Bosnia’s next big tourist attraction.The site can only be reached by car and is hidden between various trees. Besides the falls, be sure to explore the hidden caves.Also, pack shoes intended for climbing formations. Water moss, though it seems harmless it is actually the one that makes them stable stones to be slippery.

About 35 km from Puerto Vallarta, Mexico is the perfect secret beach, well hidden below ground level in a small crater. To reach it, you need to swim tunnel of 12 meters that has only 2 meters of space between water and rocks.If you still decide to go, well researched and ensure that it is open, as is sometimes closed to visitors because of studies that do.

Often called “the most magical pool in the world”,  the pool Sua It is a place you should go to believe it exists. Located in the village of lotus eater on the island of Upolu in Samoa, this inspirational 30-meter hole formed in a volcanic eruption, which formed a natural crater maze of underground pools leading to the South Pacific.Before leaving, we advise you to talk to locals because although it looks peaceful, the change in tide can cause big waves and strong current inside the pool.

Hidden in the depths of the Grand Canyon in Arizona, waterfalls Havaasu are mandatory for those who love a good challenge. Water is vivid color thanks to the high concentration of calcium carbonate which creates natural pools and troughs that are perfect for bathing.But to get to this beauty, it needs to spend a trail of 16km. Before you plan your trip make sure you have good boots for hiking, because ordinary shoes will not withstand the rocky terrain.