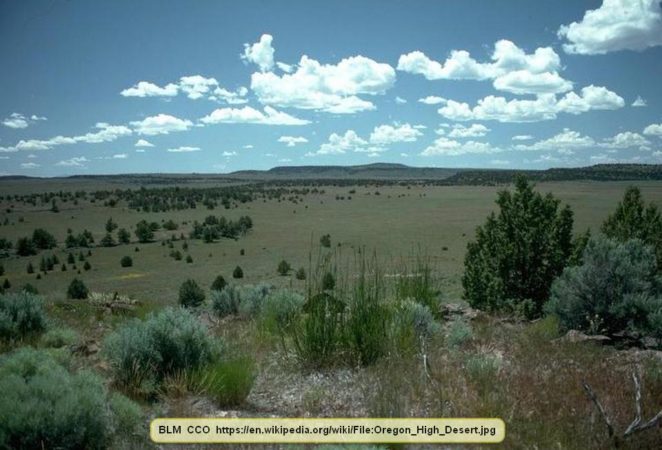 In the first part, the pictures that were shared were mostly of the western half of Oregon. Actually, that isn’t correct. They were of the part that is west of the Cascade Mountains. The mountain range doesn’t go up central Oregon and the truth is that most of Oregon is in the eastern “half”.

I should also mention that Oregon is the ninth largest state, at just under 100,000 square miles, which means that 41 states are smaller.

Still, east of the Cascades, the land is much drier. Some of it is under cultivation, but nearly all of it gets less than 10 inches of precipitation per year, which means that it is a desert. Though none of the pictures show it, there is even cactus growing in the southeast corner of the state, primarily prickly pear.

As a result of the dryness, the landscape looks a bit different than the previous pictures.

Named due to the fact that it is indeed a desert and it has an altitude of mostly over 4,000 feet, the eastern part of Oregon is the Oregon High Desert. Not all of it is as barren as shown in this picture, but this is a place of sagebrush, rabbitbrush, saltbush, scrub pine, juniper, and desert grasses. All of these can be seen in this picture.

Much of it is flat. Here, you are looking out over a vista of about 20 miles. Many people think of Oregon as a rainy place, but most of it is decidedly neither rainy or snowy.

It is far from being devoid of life, though. This is home to deer, elk, pronghorns, squirrels, diamondback rattlesnakes, gophers, and jack hares. Pronghorns are especially at home here, since they can see danger from a great distance and have level land to run on. This is in part what makes them arguably the fastest land animal.

Over the distance of a half mile, a cheetah is faster than a pronghorn. However, pronghorns can maintain high speeds for distances such as is shown. In a race with a cheetah over the distance in the picture, the pronghorn would easily win and would be ready to run again in a very short time. 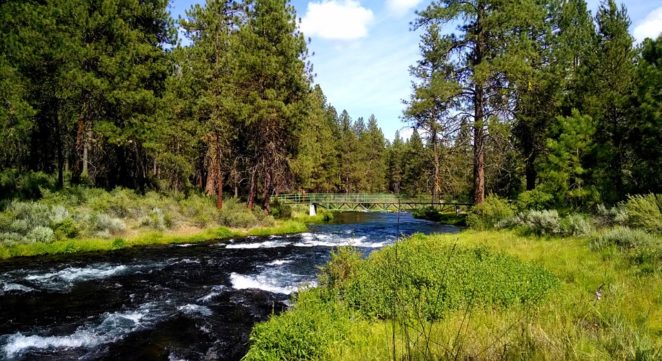 Located between Klamath Falls and Chiloquin, Collier State Park is beautiful, though it is on the east side of the mountains. The river that is shown is called Spring Creek. I've caught well over 100 rainbow trout and brook trout out of this river. As the name implies, the river is spring fed and it is very cold, even in the hottest part of summer.

In fact, people need to be careful of not falling in, during the summer. Air temperatures in the summer can reach above 110 F. The water, on the other hand, stays below 40 F. Falling in means that you can be subjected to a 70-degree shock to the system.

The water is crystal clear, though, and it is clean. I used to love drinking right out of the river. Incidentally, there is a campground about 1.4 miles from where this picture was taken and I've camped there a number of times.

Collier Park isn't large, but it features a logging museum with incredible old logging equipment and some log cabins furnished with what the loggers of old had in their cabins. As can be seen in this picture, this is a place of Ponderosa pine, also called red pine because of the color of the bark. 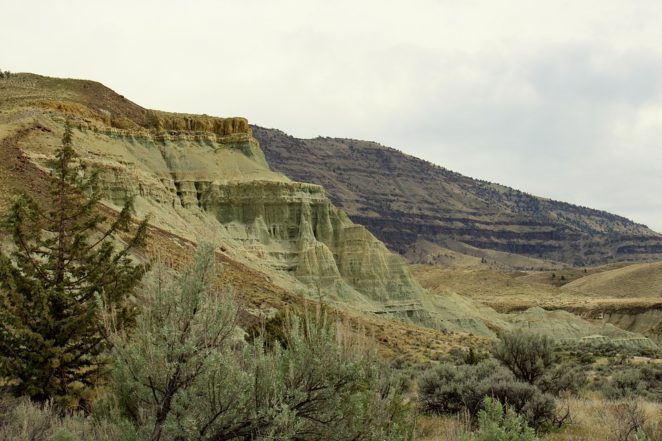 Much of eastern Oregon is made up of volcanic rock and soil. That makes volcanic formations like this one fairly common. The scrub and grasses that are growing here are quite healthy, despite the lack of moisture, because the soil is so fertile.

The formations in the background are carved out of volcanic rock by a combination of rain and wind. The wind is normal and frequent, and when it does rain, it can be a hard rain. Over many centuries, this is the result.

When it does rain, everything turns green and the wildflowers bloom. This picture was probably taken a few days after a hard spring rain. There is a row of trees in the background that is no doubt along the banks of a river or stream and the trees behind it are mostly fir trees. 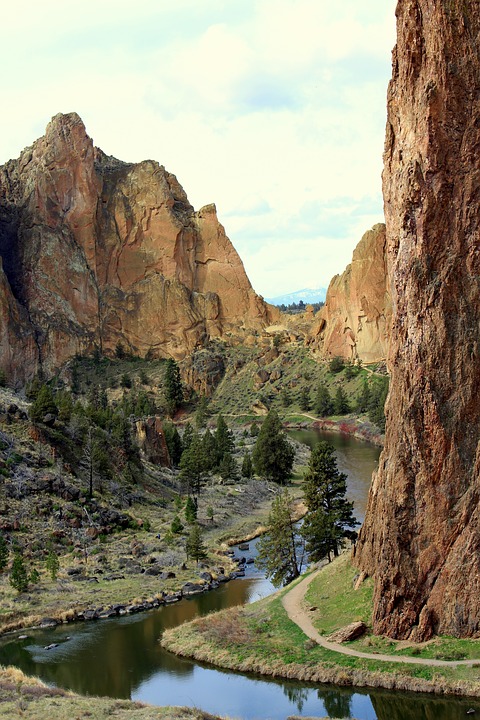 Although this part of Oregon is dry, there is water. Rivers like this one at Smith Rock have carved their way through the desert rock in a process similar to what created the Grand Canyon. 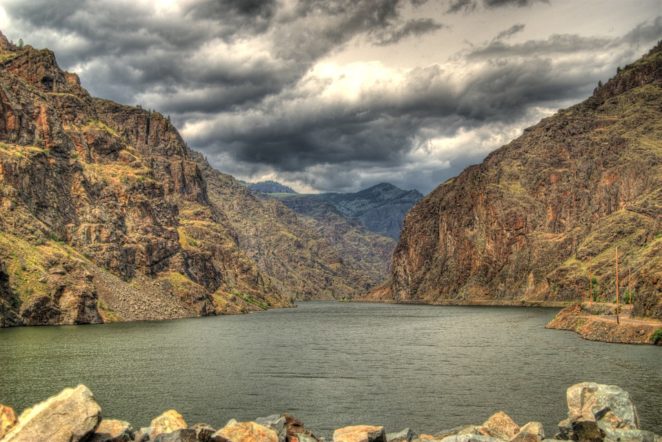 This is a more extreme example of a river cutting through the desert rocks. This is hell's canyon, on the border of Oregon and Idaho. The river is the Snake River, which forms the border between the states. There are still wild animals even here and not counting the fish. Deer, bighorns, and mountain goats have no problems with scaling the walls of this gorge. 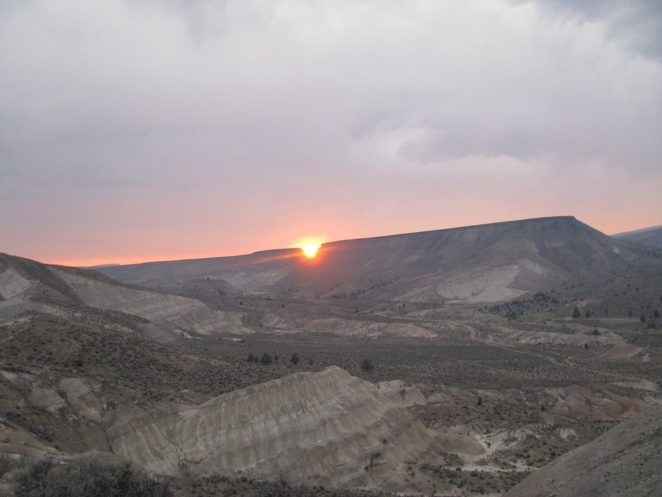 This is a nice sunset scene, overlooking the Oregon High Desert. Again, the dominant plants are grasses and scrub that can withstand the dryness of the soil. There are clouds, but the chances are that they will move on without dropping any rain. 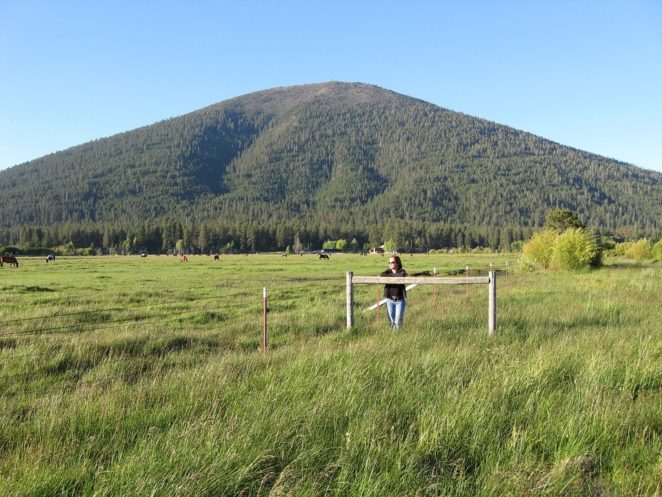 This is Black Butte. Again, the soil is volcanic, which means that it is rich. This area gets just enough moisture to allow thick, tall grass to grow. The horses in the field behind the woman are clearly pleased with the thick, rich grass.

The water is also close to the surface in spots right here. Notice the willow bushes growing to the right of and behind the woman. Where willows grow, water is within 20 feet of the surface. 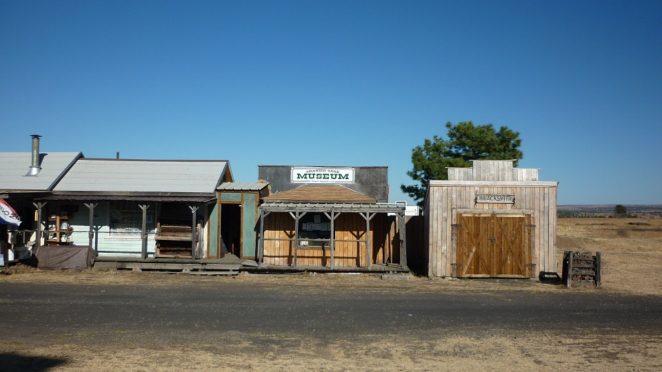 Although not a nature shot, I included this because of a fact that a lot of people aren't aware of. This is a ghost town and they are easy to find in Oregon. Oregon has more ghost towns than any other state. The towns sprang up for various reasons and the people left for other reasons. 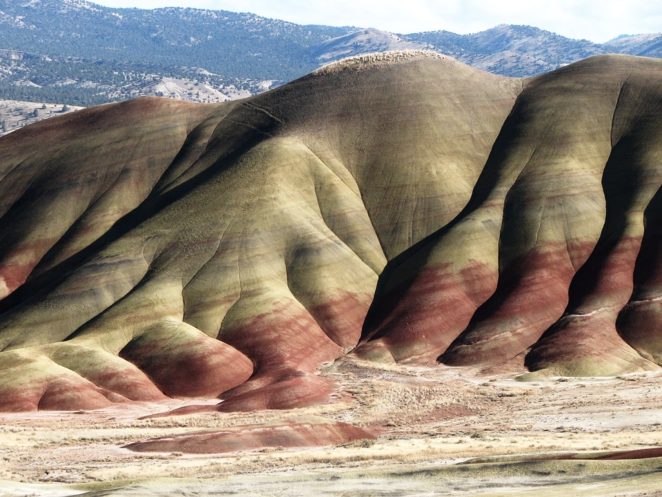 These are the painted hills in John Day Fossil Beds National Monument in northeastern Oregon. The banding on the rock, including those that are red, correspond to different periods in the past. Literally, from top to bottom, a person is looking backward in time.

These hills are also far larger than you might think. They are several hundred feet from top to bottom and this picture only takes in a section of the painted hills, left to right.

These pictures are quite a bit different than the pictures of western Oregon, aren't they?