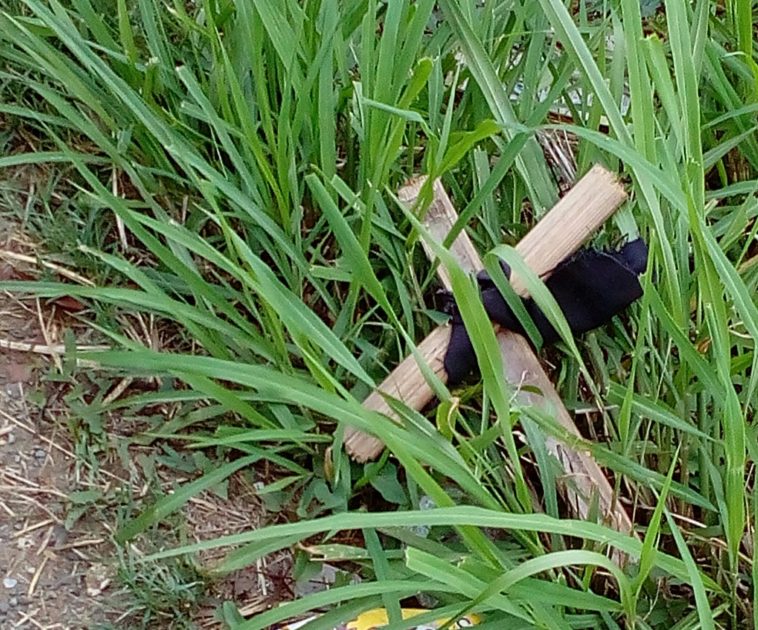 A Cross on The Road

The photo was taken a month ago on the road near our house. Here in the Philippines (or at least in our place) a cross on the road signifies that someone died in an accident on that spot.  A few days before I took this photo, a vehicular accident involving a motorcycle and a truck occurred on this curve.

A witness said that both the motorcycle and the driver was thrown a few meters away from the point of impact.  That road is curved. Though both sides of the road are vacant lots, the wild grass grows about two meters high or even more.  Blocking the view beyond the curve from both sides.

The motorbike was running so fast, the witness said. After the accident pieces of the motorbike engine was left scattered on the scene.

This is just of the accidents that happened on that area alone.  There was a time when two motorbikes collided. And there was a time when I was just about to enter our house from the porch, I heard a roar of a speeding motorcycle, then  a screech then a number of crashing sound. Then I saw the driver stand up. I ran outside but the driver already rode a tricycle (a public transport vehicle here). But the others saw him holding his arm which was bent, obviously broken.

The skid marks shows that he almost hit the tree as he was maneuvering the curve.   He lost control and fell. From where I saw him stood up the bike rolled several times about ten to fifteen meters away. Lucky for him there was no other vehicle.

But on that spot alone, I think at least two died and several sustained serious injuries from motorcycle accidents.

This year, I have seen several crosses on different places. Indicating a life has been claimed by careless driving. Just this week, a man was seriously injured by a speeding bike one night. And just three days ago, I passed another accident. The cops was still there, a motorcycle was in the middle of the road, and a pool of thick blood on the concrete.

Why are there so many accidents involving motorcycles? Simple…. CARELESS DRIVING. A number of Motorcycle drivers here are careless and arrogant!  They often ignore traffic rules and seem to have totally forgotten about driving courtesy or knew nothing about it. Some are even drunk.

These accidents were reported in the local radio stations and even in the social media. For sure some of these victims of accident were well aware of the previous accidents. Still they drive carelessly. Driving as if they owned the streets and probably they were excellent drivers that no accident could happen to them.

Here’s my advice to all motorcycle drivers out there, no matter how excellent your driving skills are, accident could happen to you. And the faster you drive, the lesser chance you have to survive.

Don’t wait after you lose a limb, worse, don’t claim the next cross or be the reason for that cross on the road.