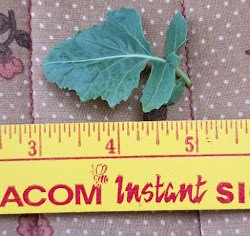 I just discovered how good kohlrabi is this summer, but it is a cool weather crop so I couldn’t try to grow any.  They don’t sell the leaves in any stores local to me, but I bought one that looked a little green around the stem end and cut an inch cube out of it to put in water on the window sill.  After a few days it started producing one new leaf like this every day, and as soon as I cut one off and eat it this rhizome grows me another one.  I figure if I had about 10 of these cubes floating in water I would get enough greens to satisfying my daily kohlrabi cravings.

A food blogger who is tracing the background of kohlrabi states that Pliny the Elder may have spoken of it in the first century AD using the name Corinthian turnip.  Pliny was not the most trustworthy of historians as, in my mind at least, he is most notable for having written that moss-backed whales used to make war on sailors by floating in the ocean and pretending to be islands.  He said they would thus lure them to dock their little boats on their backs.  Then the devious whales would plunge to the depths, taking unsuspecting sailors to their watery graves.

Oh, and if you don’t see me around much (or at all) for a few weeks do not suspect that I have gone to the bottom of the sea, or had any other calamity, try to miss me a little and know that I will be back by October if not sooner, hopefully having become eligible for my first Virily payment in the interim.  Wheee!