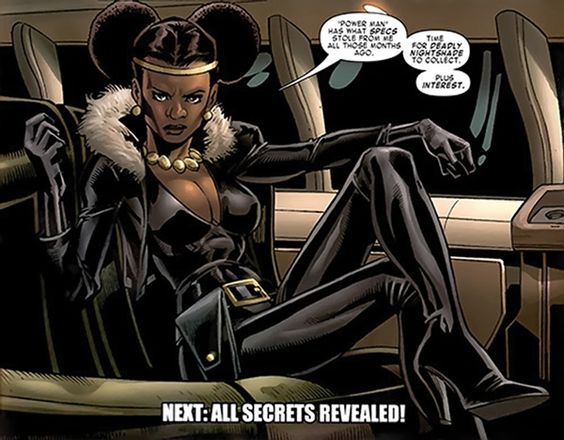 Singer Nabiyah Be has made her announcement on Twitter on Thursday that she will be starring as the Marvel character named “Nightshade” in the “Black Panther” motion picture that will be barring any unforeseen circumstances in theaters in February 2018.

Nightshade in my opinion looks a lot like D C Comic heroine Tanya Spears who is currently the character named “Power Girl” in the D C Comics universe since she made her debut in the “World’s Finest” comic books in July 2014 due to their hairdo.

Nightshade when she is not doing her thing in the Marvel Universe is secretly Tilda Johnson. It appears that the Marvel Studios is doing what they can to attract the fans of the “Black Panther” character to see the movie when it comes out in 2018.

I know of an artist on Devianart who goes by the name Red Falcon 23 who created a character named Miss Nightshade who when she is not fighting crime with the Neo Japan Girls characters that he created goes by the name Chloe Neal who is a model.

All I can say about Nabiyah Be is good luck playing the Nightshade character in the “Black Panther” movie since the tougher a villain is when they battle a hero, the battles would make any super prize fight that is hyped as the next big thing look like a puny prize fight by comparison.

It is a good thing that I am not a talk show host either on television or radio since I am a fan of former pro wrestler, manager and wrestling announcer Bobby “The Brain” Heenan. I would ask Nabiyah the following question which is “Did your parents wait nine months to name you Nabiyah?”

If she is a lady that will not resort to taking out her wrath on me for “asking a personal or stupid question” she would ask me “Are you by any chance named after playwright the late George Bernard Shaw?”

I would answer “I doubt it since I am more like The Joker without being extremely mean to my enemies due to my admiration of deceased comedians that did not resort to telling dirty jokes on television or movies. How about that?”

I would love to see her facial reaction to that remark which would be priceless.