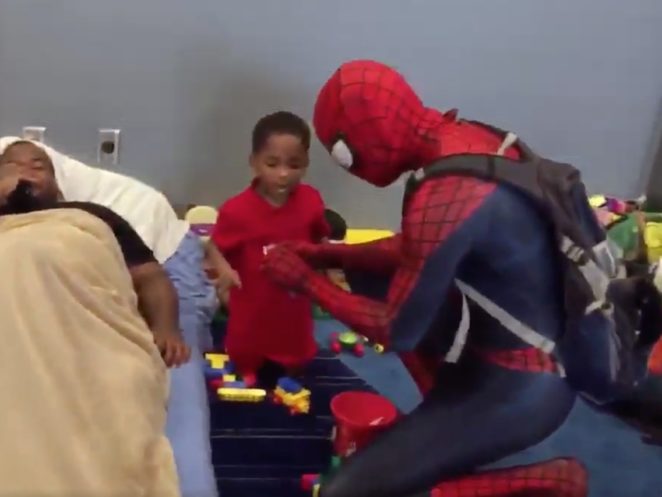 You have heard of the saying “The silver lining in the dark cloud”. In the midst of the tragic events of Hurricane Harvey that wrecked havoc in the southeastern section of Texas, at the George R. Brown Convention Center a gentleman who is dressing up as the Friendly Neighborhood Spider-Man is cheering up the kids and adults who are going a very hard time while staying at the center until they can return to their homes that are this time under water from the damage caused by Hurricane Harvey.

It is nice to see a fan of the Amazing Spider-Man doing his part to give a light to the people who are the Convention Center in Houston. Who is the guardian angel underneath the mask remains a mystery. I am sure this gentleman is doing his part to help out the victims of Hurricane Harvey as a gesture of goodwill and does not want to have his identity revealed which is a good thing.

I have always said that we admire our heroes who assist anyone in time of need for the sake of doing the right thing and not making a huge deal to the press that they do it for the sake of gaining some good publicity in their communities.

Whoever is the person who dresses as the Amazing Spider-Man in Houston as well as the persons who have rescued people in their flooded homes in the disaster zone, all I can say is “thank you” for saving lives and helping people in their time of need.

I am sure J. Jonah Jameson who is the publisher of the fictional New York City newspaper The Daily Bugle  in the Spider-Man comic books, movies and cartoons would give his hatred of Spider-Man and salute him for saving lives and not be a public menace this time around. Or would he?