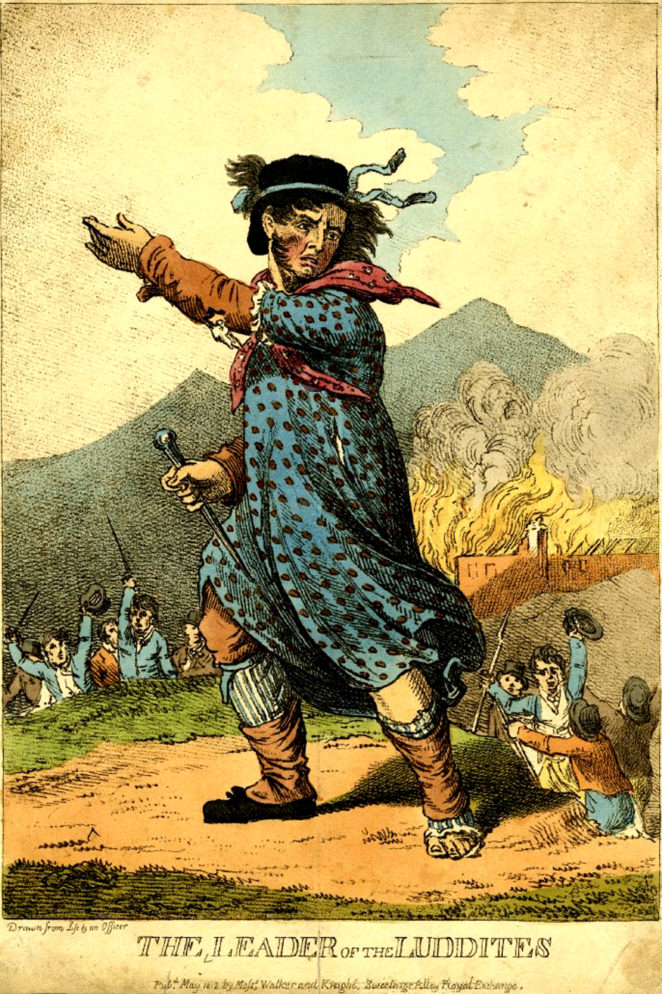 General Ned Ludd never existed, but his followers wreaked havoc in the factories of early 19th-century Britain and provoked strong reprisals from the government of the day. The Luddites played a role in the development of the working-class movement that led eventually to the formation of legal trade unions.

The origin of the Luddites

The name probably originates with Lud, a mythical king of early Britain who was said to have built the first walls of London and after whom Ludgate Hill is named. The Luddites saw themselves as invoking the spirit of free-born British people from a past age. By claiming to be based in Sherwood Forest they also saw themselves as latter-day followers of Robin Hood, striking a blow for the ordinary working man against the forces of power and capitalism.

Their actions began in 1811 with the sending of letters to mill owners in Nottinghamshire and Leicestershire who had recently installed steam-engine powered machines (known as frames) that increased production in the hosiery and knitwear industries but needed fewer people to do the work. The factory system was also making it uneconomic for people to work on hand-powered frames in their own homes, as had been the traditional pattern in these areas.

War with France had given the mill owners more incentive to install powered knitting frames, given that Napoleon Bonaparte’s “Continental System” had effectively sealed the continent of Europe against exports from Britain. In order to cut their costs, and thus make it feasible for exports to be sent to other markets, the industrialists of Britain had no option but to produce more by using fewer workers, on lower wages, and that meant installing large, steam-driven machines.

A series of poor harvests during the period from 1808 to 1812 had caused food prices to rise, so there was genuine hardship in the general population. Many people felt that they had to do something to fight against the forces that were oppressing them, and they saw the machines in the factories as the root cause of their distress.

The spread of Luddite discontent

The above-mentioned letters, signed by “Enoch”, were threats to the mill owners to remove the machines, or see them destroyed, and the actions that followed served to carry out those threats. Bands of men broke into the factories at night and smashed the machines with sledge-hammers. The “General’s Army” sometimes consisted of hundreds or even thousands of men marching in disciplined order through the streets on their way to the factories. Even if there was no actual “Ned Ludd”, somebody was hard at work organising these events.

The Luddites soon spread their activities northwards to the mills of Lancashire and Yorkshire, where the woollen and cotton garment industries were based. Government troops had to be brought in to protect the factories and arrest the demonstrators, one estimate being that 12,000 soldiers had to be diverted from the war effort.

Needless to say, some Luddite activities did spill over into more general mayhem, with food riots riding on the back of the organised machine-breaking. There was, for example, a riot in Manchester in April 1812 in which desperate women raided the stocks of potatoes held by dealers who were charging extortionate prices for them.

The government’s response was to meet force with force, and a Frame-Breaking Bill was passed by Parliament in 1812. This made the destruction of machinery punishable by hanging. One opponent of the bill was Lord Byron, whose speech in the House of Lords included the words:

“Nothing but absolute want could have driven a large and once honest and industrious body of people into the commission of excesses so hazardous to themselves, their family and their community.”

This statement made the case that it is wrong to regard the Luddite movement as that of an undisciplined mob, despite its excesses. On the one hand, it could be said that, by destroying the new machines, they were depriving the operators of those machines of their living, but it was also true that the goods produced in the factories were often of much lower quality than those of the handloom weavers, who were craftsmen with a real pride in their work.

Ultimately, the actions of the Luddites were futile, because economic necessity was driving the movement of industrialisation, and the machine-smashing could only delay the changes, not prevent them for ever.

The Luddite cause was not helped by the assassination of the Prime Minister, Spencer Perceval, on 11th May 1812. Although it soon became clear that his assassin, John Bellingham, was motivated by purely private motives, many people felt that anything that threatened violence against the establishment had to be resisted strongly, whatever the provocation. Memories of the French Revolution were vivid in many peoples’ minds, and the connection between mob violence and the murder of political leaders was an easy one to make.

The suppression of the Luddites was carried out by means of the punishment of a number of their leaders, including hangings and transportation to Australia, although none of those leaders answered to the name of Ned Ludd.

The legacy of the Luddites

The textile workers of the time had no recourse to a trade union to represent their grievances to factory owners, so there was no safety valve when problems arose. The “Combination Acts” of 1799 and 1800 made trade unions illegal, so any such activity was driven underground. Although these laws were repealed in 1824-5 the process of collective bargaining was illegal until 1860. The Luddite movement was seen by some as a good reason for suppressing trade unions, but ultimately it showed that working people needed to be able to deal with their problems in a constructive way, around a negotiating table, without being forced to take extreme measures.

The word “Luddite” is used today to describe someone who sets their face against progress and stubbornly refuses to accept change. In terms of the original Luddites this charge has some force, in that change was inevitable and breaking the machines was never going to work as a means of reversing the trend towards mechanisation in the garment industry. However, there are occasions when the Luddite mentality has its place, in that craftsmanship should be protected and preserved when under threat. Once certain skills are lost they will be lost forever, and actions that remind people of that fact should not always be rejected on the grounds that they are anti-progressive.