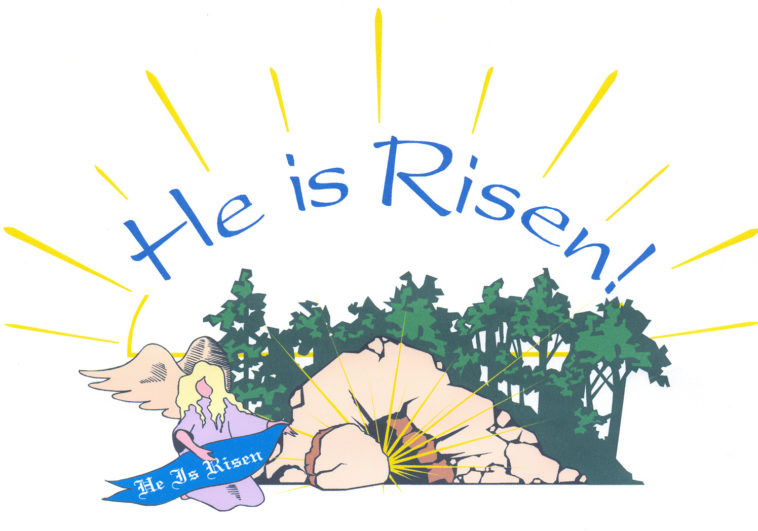 Clip art is in the public domain.

Although you might be aware that Eastern Orthodox Christians celebrate Easter on a different date than other Christians, you may not be aware that the date on which Jesus rose from the dead had been a point of contention throughout the history of the Christian church.

Note: Although the word “Easter” did not come into existence until centuries after some of the events described here, I use it because it is the most common English name for the celebration.

Near the end of the second century AD a controversy arose over when to celebrate Jesus’ resurrection. Early church historian Eusebius describes it:

“A question of no small importance arose at that time [referring to the reign of Pope Victor I, 189-199 AD]. The dioceses of all Asia, according to an ancient tradition, held that the fourteenth day of the moon [Nisan on the Jewish calendar], on which day the Jews were commanded to sacrifice the lamb, should always be observed as the feast of the life-giving pasch, contending that the fast ought to end on that day, whatever day of the week it might happen to be. However it was not the custom of the churches in the rest of the world to end it at this point, as they observed the practice, which from Apostolic tradition has prevailed to the present time, of terminating the fast on no other day than on that of the Resurrection of our Saviour.” [Church History 5, 23]

Asian Christians, many of whom had moved to Rome, celebrated the resurrection on the 14th day of the Jewish month of Nisan, the day on which the Jews celebrated Passover. This meant that, more often than not, the feast did not fall on a Sunday. The people who followed this practice became known as Quartodecimans based on the Latin word for fourteen. (Eusebius did not refer to them by that name because he wrote in Greek.)

Irenaeus of Antioch writes that the church had allowed for diversity in setting the date of the celebration, at least as far back as Pope Sixtus I (about 120 AD). Polycarp (69-155 AD), who had been taught the faith by John the Apostle, celebrated Easter on 14 Nisan which implies that the apostle John was also likely to have celebrated it on that day. The Quartodecimans were not doing anything unusual.

This makes it all that more curious that, around the year 195, Pope Victor I tried to excommunicate the Quartodecimans. Victor, being the first pope to come from the Roman provinces in Africa, was not Asian as the Quartodecimans tended to be, but there is no indication that prejudice was involved although it can’t be entirely ruled out. The issue exploded. There were letters exchanged and synods called. In the end Victor, having gotten a bit carried away, backed down. Other bishops, including Irenaeus, rebuked Victor for his actions. The dispute did not end, however.

In 325 the Emperor Constantine gathered the bishops together at Nicaea to decide on the Arian controversy. They settled that issue but, while they were gathered together, the bishops decided to tackle a few other issues. One of those issues was the day on which Easter would be celebrated.

A few years before this, in 314, a provincial council was held at the town of Arles in Gaul and it decreed that the church should be unified in the date on which it celebrated Easter and called for the pope to send out a letter each year announcing which date that should be. (Since it was only a local council rather than an ecumenical council, its decisions were not binding on the entire church.) The Council of Nicaea ruled that the date of the celebration of Easter should be decided apart from the Jewish calendar as was the practice in Alexandria who determined the date of Easter as the first Sunday following the first full moon after March 21st. The bishops did not officially adopt the Alexandrian system, however, or any other system for that matter. They never said how it should be determined. It took a couple of decades to decide how the calculation should be done and centuries more for the computation to be accepted throughout the church.

During the time of Pope Gregory the Great (590-604), missionaries from Rome came to Britain and discovered that the British and Irish Christians were following a system different from theirs. We know from the writings of Bede that the British and Irish celebrated Easter on the Sunday which fell during the period of 14 to 20 Nisan on the Jewish calendar. It took a while but eventually the Irish and British Christians adopted the Alexandrian system.

In 1997 the World Council of Churches tried to settle the issue once and for all. They proposed that, starting in 2001 when it happened that both sides would celebrate Easter on the same date, the date would be determined by the following formula: Easter would be the first Sunday following the vernal equinox (when the sun is directly over the equator) at the meridian of Jerusalem. In other words, Easter would be the first Sunday after the first day of spring in Jerusalem. So far it has not been implemented. It is unlikely that this plan will ever be implemented.