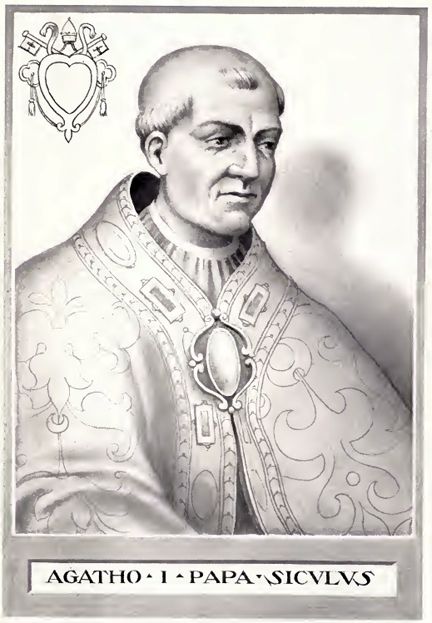 Depiction in Art: He is usually shown as a pope wearing a tiara and holding a long cross.Although relatively unknown, Agatho ranks with St. Leo the Great and St. Hormisdas for his outstanding contribution to orthodoxy in the East. He was a Sicilian, probably from Palermo. He may be the Agatho referred to by St. Gregory the Great in a letter to the abbot of St. Hermes in Palermo. The abbot told Gregory that he would allow Agatho to enter his monastery if Agatho’s wife was willing to enter a convent. If this is the same Agatho, he would have been a very old man.

Agatho was known as a friendly man who got along well with people. He was a talented businessman. Contrary to custom, he kept the treasurer’s office in his own hand after becoming pope.

Shortly after becoming pope, Agatho was called upon to settle a dispute between Wilfrid, Bishop of York (England) and Theodore, Archbishop of Canterbury. Wilfrid came to Rome in 679 complaining that Theodore had divided his diocese and appointed three new bishops to govern the newly-created sees. Agatho held a council at the Lateran to discuss the issue and it was decided that it was proper to divide the diocese but that Wilfrid should be allowed to appoint the new bishops.

The Third Council of Constantinople, the Sixth General Council, took place during Agatho’s pontificate. This council dealt with the Monothelite heresy which taught that Jesus had only one will. It also reunited Constantinople and Rome. The Emperor Constantine IV, the Bearded, having pacified the empire politically, wanted to put an end to religious division as well. The emperor wrote to Pope Donus suggesting a conference on the matter, but, by the time the letter arrived, Donus had passed away. Agatho, who had succeeded Donus, was quick to follow up on the Emperor’s offer of peace. He ordered that councils be held throughout the West so that legates could present the universal tradition of the Western Church and then sent a large delegation to meet the Easterners at Constantinople.

The conference turned into a general council. The legates, patriarchs and fathers gathered in the imperial palace on 07 Nov 680. The Monothelites presented their case. This was followed by a reading of the letter written by Pope Agatho explaining the Church’s traditional teaching that in Christ there are two wills, divine and human. The council agreed with Agatho. Patriarch George of Constantinople, and most of the other bishops present, accepted Agatho’s explanation and the council proclaimed the two wills in Christ. The Monothelite heretics, Sergius and Cyrus, were condemned (anathematized). Pope Honorius (625-638), a Monothelite, was also included in the condemnation. The council ended in September of 681 and the decrees were sent, but Agatho had died in January.

Agatho also negotiated with Constantine IV to end the tax levied on newly consecrated popes by the imperial treasury.

Agatho is considered to be a saint by both the eastern and western churches.Text © 2018 Gary J. Sibio. All rights reserved.