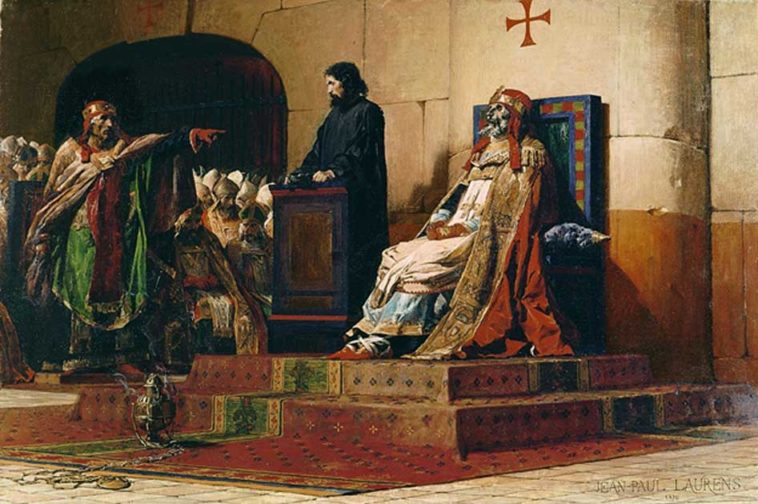 As bizarre as this story sounds, it actually took place.

In the past few centuries the Catholic Church has been blessed with holy, spiritually-minded popes. Even a cursory study of Christian history will show that this was not always the case. After the death of Pope Formosus in 896, Stephen VII took the papal throne. Stephen hated Formosus and, from all appearances,  may have been insane, accused his predecessor of perjury and of having taken the papacy illegitimately. His answer, put the dead pope on trial. The incident has become known as the Cadaver Synod.

There was a rapid succession of popes during this period with men taking the office due to the manipulations of various Roman factions. In the period from 872 through 965 there were 24 popes. In fact, between 896 and 904, just nine years, there were nine popes. The papacy changed hands when the current pope was deposed or killed by politically powerful families.

Formosus, Latin for “good looking,” was made Bishop of Porto by Pope Nicholas I in 864. He brought the gospel to Bulgaria where the people requested that he be made their bishop. This request had to be turned down because it would have violated the 15th canon of the Second Council of Nicaea (787) which forbade a bishop from moving from one see to another. Formosus was not a particularly bad man but he made some very powerful enemies.

In 875 Formosus, now a cardinal, fled Rome for Tours in western France because he feared the current pope, John VIII. At the Synod of Santa Maria Rotunda, John issued a series of accusations against him claiming that he had corrupted the minds of the Bulgarians so that they would accept no other bishop besides himself and that he was attempting to usurp the papacy. Formosus was excommunicated.

Another synod was held at Troyes in 878. Formosus attended this synod and he begged the bishops’ forgiveness, asking that the excommunication be lifted. He promised to never enter Rome again and that he would not try to regain his office at Porto. It was a promise he didn’t keep.

John was murdered in December of 882, the first papal assassination, and Formosus returned to Porto where he served as bishop until being elected pope on 06 Dec 891.

About this same time, Arnulf, whom Formosus had crowned Holy Roman Emperor, also died. Lambert, the son of Guy III of Spoleto who had so frightened Formosus, and his empress-mother Angiltrude entered Rome just as Stephen VI became pope. It is in this political context that the Cadaver Synod was held at the beginning of 897.

So why would Formosus crown Lambert and then ask Arnulf to invade? One theory says that Formosus was always pro-Carolingian and was coerced into crowning Lambert. Stephen may have been forced by Lambert to hold the synod so that, now that Carolingian control had collapsed, he could regain his power and exact his revenge on Formosus. However, in 1932 historian Joseph Duhr shot down this theory by pointing out that Lambert was also present at the Council of Ravenna when the decrees of the Cadaver Synod were revoked and approved of the revocation. There is also evidence that Formosus and Lambert were on good terms as late as 895 when Lambert’s cousin, Guy IV, expelled the Byzantines from Benevento. Girolamo Arnaldi postulates that it was Guy IV who entered Rome with his mother, Angiltrude, in Jan 897 and agitated for the synod.

Whatever his motivation, around January of 897 Pope Stephen VII ordered that Formosus’ corpse be exhumed and brought to the papal court to receive judgment. The trial was held in the Basilica of St. John Lateran. The corpse was seated on a throne and a deacon, a teenager, was given the unpleasant task of answering for him.

The charges against Formosus included:

Stephen screamed and ranted, mocking and insulting the corpse. During his infrequent momentary pauses the poor teenage deacon would try to get in a few words denying the charges.

Not surprisingly Formosus was convicted. He was stripped of his papal vestments and the three fingers he used to bless were severed. Everything he had done, all of his acts and ordinations, including the ordination of then Pope Stephen VII as Bishop of Anagni, were declared invalid. His body was buried in a cemetery for foreigners but was later dug up, tied to weights and thrown into the Tiber River.

The disgusting spectacle turned the people against Stephen. Formosus’ body washed ashore where it was retrieved by a monk. Miracles were attributed to it and Stephen was thrown into prison by a mob in July or August of 897 where he was strangled.

Stephen was succeeded by Theodore II who, that December (November, according to Wilkes), convened a council which cleared Formosus of all charges. His recovered body was buried in St. Peter’s Basilica dressed in papal vestments. However, Theodore’s papacy lasted a mere 20 days and, in 898, Pope John IX (898—900), who also nullified the Cadaver Synod, convened two synods, Rome and Ravenna, confirming Theodore’s decision. He ordered that the acta of the Cadaver Synod be destroyed and prohibited future trials of the deceased.

This was not the end, however. Pope Sergius III (904–911), who had taken part in the Cadaver Synod as a co-judge, overturned the rulings of Theodore II and John IX, reaffirming Formosus’ conviction, and had a laudatory epitaph inscribed on Stephen’s tomb. This was the last official act on this trial made by the Church.