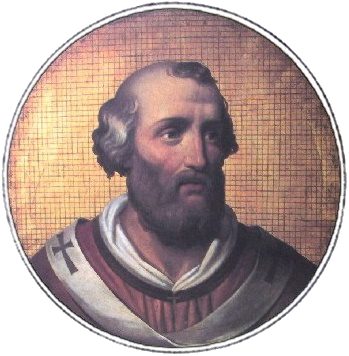 Octavianus was the son of Alberic II of Spoleto, a patrician who styled himself to be the Prince of Rome. He did wield a substantial amount of power, however. The identity of his mother is not certain but was likely Alda of Vienne, the daughter of Hugh of Italy and Alberic’s stepsister. Benedict of Soracte says that Octavianus was the son of Alberic’s concubine. If Alda was his mother, Octavianus would have been 18 years old when he became pope. If his mother was the concubine then he would have been 12.

Alberic died in 954 but he provided for his son by ensuring that the next vacancy in the Chair of Peter would go to his son. In November of 955 Pope Agapetus II died and Octavianus, then the Cardinal Deacon of the deaconry of Santa Maria in Domnica. He was elected pope on 16 Dec 955 taking the name John XII. He used both names as pope.

Sometime around 960 John personally led an army against the Lombard dukes in an attempt to regain control over the parts of the Papal States they had taken. The dukes sought the assistance of Gisulf I of Salerno who came to their aid causing John to retreat. John worked out a treaty with Gisulf. If he didn’t help the dukes John would give up papal claim to Salerno.

John also negotiated a treaty with Otto I, King of Germany whom he also appointed King of Rome. Later John became afraid of Otto and double-crossed him. Otto returned to Rome and demanded a council to deal with John. John responded by threatening to excommunicate anyone who tried to depose him. The council deposed John while he was away on a fishing trip and declared Pope Leo VIII to be pope. John returned to Rome and an uprising forced Leo to flee. He called a council which declared his deposition as uncanonical. John tried to negotiate with Otto but died before anything could be resolved.

Usually the more politically-minded a pope is, the less he is interested in the spiritual. This was also true of John to a large degree but he did not completely ignore the spiritual aspects of his position. He wrote letters encouraging church leaders to live a holy life. He established new bishoprics and appointed a replacement Archbishop of Canterbury.

Not that John was a particularly holy man himself. He was known for living a life of debauchery and, when Otto went off to defend him in battle, he suggested that John give up his worldliness. He was ignored. John turned the Lateran palace into a brothel for all intents and purposes.

The legend of Pope Joan may be based on one of John’s mistresses who had a lot of influence over the pope. We don’t know for certain.