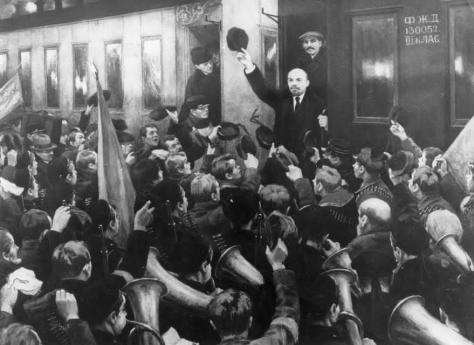 “And what rough beast, its hour come round at last, slouches towards Bethlehem to be born?”

That is the conclusion of W B Yeats’s famous poem “The Second Coming”, written in 1919. This was a time when the future of Ireland was uncertain and violence seemed to be the only recourse for establishing independence from the United Kingdom. World War One was over, but a state of war existed in Ireland as the British desperately tried to exert control.

Seen in this context, Yeats’s poem expresses fear for the future, seen in the visionary form of a terrible monster coming from the desert and emerging as a monstrous parody of the Christian hope for the return of Christ. There is an echo of a repeated line from Yeats’s earlier poem “Easter 1916”, namely “A terrible beauty is born”.

However, I wonder if Yeats might not have had another event in mind when he wrote about his “rough beast” with “A gaze blank and pitiless as the Sun”. This was the journey made by Vladimir Ilyich Ulyanov, otherwise known as Lenin, from Switzerland to St Petersburg in 1917. Lenin’s arrival is generally regarded as the spark that lit the fuse of the October Revolution and the birth of Communism in Russia.

Lenin had spent many years honing Marx’s philosophy and working out how a Communist Revolution could be prompted in Europe. Russia, which was primarily a backward agricultural country, did not appear to be prime territory for the overthrow of capitalism, which Marx had envisaged would happen when the mass of workers in industry realized that they were being exploited by the bourgeoisie and took over the factories. However, Lenin’s version of Marxism showed that a Russian Revolution was feasible, as were revolutions throughout Europe.

Lenin therefore spent much of his time travelling in Western Europe and involving himself in the international socialist movement. That was why he found himself in Switzerland in 1916. Meanwhile, events were moving towards revolution in his home country, although the February 1917 Revolution that overthrew the Tsar had not been organized by the Bolsheviks and did not lead to a Socialist government.

Lenin desperately wanted to be back in Russia, but his problem was that Russia was at war with Germany and the most obvious route from from neutral Switzerland to Russia was through Germany.

The German government knew all about Lenin, and they also knew that a revolution in St Petersburg, led by Lenin, might be just what was needed to take Russia out of the war and enable Germany to concentrate on its western front at a very difficult time for them now that the United States had joined the Allies. It was therefore in Germany’s best interest to give safe passage through their territory to this particular enemy alien.

However, the imperialist Germans, led by Kaiser Wilhelm, were also terrified of Socialist revolution taking place in their own country. Just suppose that Lenin was able to use his journey through Germany to make stirring speeches at every station the train stopped at and light the revolutionary fuse there before doing so in Russia?

The solution was the “sealed train”. Lenin and his entourage were conveyed in locked carriages from which they could not leave nor could anyone else enter. This applied for the whole journey from the Swiss border to the Baltic Sea port of Sassnitz, from where they took a ferry to Sweden. Not only did Lenin and his party get across Germany in safety, but they also took with them a gift from Germany in the form of a consignment of gold bars. The Russian Revolution was financed at least in part by the German Kaiser.

Winston Churchill was later to describe this event as Germany turning upon Russia “the most grisly of all weapons”. It was one that worked. In March 1918 the new Bolshevik government, led by Lenin, signed the Treaty of Brest-Litovsk that took Russia out of the war. However, this was too late for Germany to do much about the outcome of the war, which was now going very much in the Allies’ favour.

So where does this leave Yeats and his “rough beast” line? The poem “The Second Coming” is highly symbolic, but how do the symbols relate to Lenin? He could hardly have been described as a “rough beast” – certainly not in his appearance and general behaviour, and the bestiality of his political actions in ordering the killing of his opponents had not become apparent by the time that Yeats was writing his poem.

However, suppose the rough beast is Communism itself? Yeats might well have regarded this political philosophy as rough, and been aware that it was never going to become the guiding ethos of a nation without exciting considerable opposition that would inevitably lead to bloodshed. The Irish revolution, then in full swing, was not dominated by socialists – although they played their part – and there was never any danger that Ireland would become a people’s republic in the sense that Russia was becoming.

But had Communism’s hour come round at last as Lenin made his way towards St Petersburg? It could be seen as “slouching” in that the journey was hardly a rapid one – Lenin’s party, once in Sweden, had to journey north right round the Baltic Sea and enter Russia from Finland. And once in St Petersburg Lenin did not find things at all easy – he had to escape back into Finland at one stage before the second Revolution took place in November 1917.

Given the state of Europe in 1919, with Yeats’s Ireland and Lenin’s Russia both in upheaval and uncertain how things would pan out, it does not seem fanciful to regard Lenin’s arrival in St Petersburg as a second coming. And could Yeats have been thinking of the journey in the sealed train as being a form of delivery down a birth canal? Perhaps that is taking the symbolism a bit too far, but if the notion of Communism does have a certain beauty about it, in terms of the recognition of the worth of ordinary people and the value of common purpose, it should also be seen as a “terrible beauty”, as more recent history has shown all too clearly.