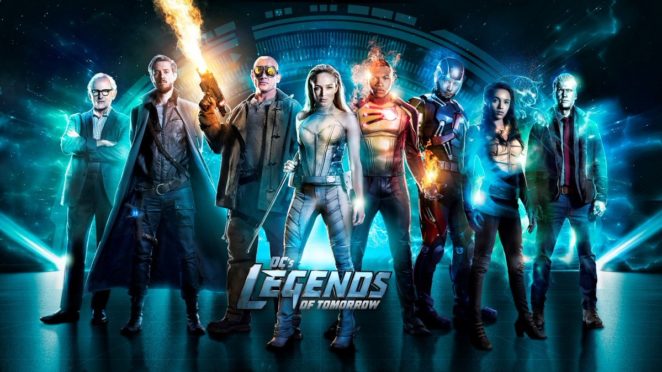 DC’s Legends of Tomorrow, or simply Legends of Tomorrow, is an American TV series based on DC Comics with crossover characters from Arrow, The Flash, and few minor crossover roles from Supergirl, and also as a spin-off series existing in the same fictional universe. This series was premiered on January 21, 2016, renewed on January 2017 for its third season to be aired this October 2017.

On Season 1, the story started when Time Master Rip Hunter, played by British actor Arthur Darvill (Rory Williams of Doctor Who), went rogue after his wife and his kid was murdered by Vandal Savage, played by Danish actor Casper Crump (Major Kerckhover of Legend of Tarzan), the main antagonist in the season who is immortal and travels at different timelines. To stop Savage, Hunter recruited a team of superheroes but he prefer to call them as legends. This group of legends consist of Ray Palmer aka The Atom, played by Brandon Routh (Clark Kent of Superman Returns), an inventor, scientist, businessman and former CEO of Palmer Technologies who developed a power-suit that shrinks and even gets humongous; Sarah Lance aka The White Canary, played by a former dancer of Avril Lavigne and Lady Gaga turned-actress Caity Lotz (Ava of The Machine), a vigilante and former League of Assassins member suffering from rage issues after being resurrected by the mystical Lazarus Pit at Nanda Pharbat; nuclear physicist Martin Stein, played by Canadian actor Victor Garber (Thomas Andrews of Titanic / Charles Townsend of Charlie’s Angels), and former high school athlete Jefferson “Jax” Jackson, played by British Gambian actor Franz Drameh (Ford of Edge of Tomorrow), who together become the fusion hero called Firestorm; an Egyptian priestess incarnate who had the original name of Shayera Hol and Chay-ara, who used Kendra Saunders as her present name aka Hawkgirl, played by Ciara Renee (Ellen of Master of None), who chose to leave the team at the end of first season; Carter Hall aka Hawkman, played by German-born actor Falk Hentschel, who used to be a backup dancer of Mariah Carey and Britney Spears, an Egyptian prince named Prince Khufu who is fated to reincarnate throughout time along with his soulmate Kendra; a son of a career criminal Leonard Snart aka Captain Cold, played by British actor Wentworth Miller (Michael Scofield of Prison Break / Dr. Adam of Underworld / Chris Redfield of Resident Evil: Afterlife), who uses cryonic gun to freeze objects and people on contact, sacrificed himself at the first season to save his team, but came back in the second season as a recruit of an antagonistic team called Legion of Doom; and the last to recruit was Snart’s partner in crime named Mick Rory aka Heat Wave, played by half-Norwegian and half-Irish actor born in UK but raised in Australia Dominic Purcell (Lincoln Burrows of Prison Break / Seamus of Equilibirum / Drake of Blade: Trinity), an arsonist and career criminal who uses a heat gun capable of burning almost anything.

On Season 2, the time masters were defeated and the team are left to guard their timelines, and copes with the absence of their time traveler ship captain of their ship called Waverider. On this season, they faced the Legion of Doom, a time-travelling super villain trio led by Eobard Thawne aka Reverse Flash, played by Matt Letscher (Captain Harrison Love of The Mask of Zorro), one of Barry Allen aka The Flash’s arch enemies who is also a speedster. Among his two other members are: a wealthy businessman who was a member of League of Assassins nicknamed as Al Sa-her aka The Magician,who later became the Demon’s Head or Ra’s al Ghul, Malcolm Merlyn, played by British actor John Barrowman (Harkness/Jack of Doctor Who); and the other one is Damien Darkh, played by Neal McDonough (Timothy “Dum Dum” Dugan of Captain America: The First Avenger and Marvel’s Agent Carter), a former friend-turned-rival of the previous Ra’s al Ghul, who also killed White Canary’s sister named Laurel Lance aka Black Canary.

This legion was aided by former legend named Leonard Snart to find the biblical item called Spear of Destiny, which can rewrite their fates, and control their desires. Yet, the team of legends is joined by two new members: an African superhero from 1940s superhero team called Justice Society of America named Amaya Jiwe aka Vixen, played by British actress Maisie Richardson-Sellers (Korr Sella of Star wars: The Force Awakens / Eva Sinclair of The Originals), who used the Anansi Totem, a mystical pendant that gave her the ability to channel the power of any animal in existence; the other recruit is a modern-day historian named Nate Heywood aka Steel, played by Nick Zano (Hunt of The Final Destination), who has the power to become a solid metal, preferably a steel. Also in the cast is Amy Pemberton (Eleana Glenmore of Game of Thrones / Cassie of Doomsday) who voiced as Gideon, the artificial intelligence of the time travel ship called Waverider.

This series has also brought crossover roles from the series called Arrow like Laurel Lance aka Black Canary, Felicity Smoak, John Diggle aka Spartan, Quentin Lance, Nyssa Al Ghul, etc. and also from The Flash series with Barry Allen himself, Caitlin Snow aka Killer Frost, and Cisco Ramon aka Vibe and Kara Danvers of Supergirl.

Since this series is all about time-travelling, our legendary superheroes had also met famous historical and fictional figures like Jonah Hex, King Arthur, Al Capone,  JRR Tolkien, George Lucas, Albert Einstein, King Louis XIII, P.T. Barnum, Julius Caesar, Queen Anne of Austria, and US Presidents George Washington, Ulysses S. Grant, Ronald Reagan. They had been to Jurassic era too where they meet dinosaurs, and even traveled the future where Starling City’s Green Arrow is John Diggle’s son.

Legends of Tomorrow is really a nice series to watch especially if you’re an avid fan of DC comic books plus history where you get to jump along timelines watching its episodes. I have no more words to say except that this is one of the excellent crossover series DC has ever made. Deserves to have continuous seasons for exciting actions and to unveil lots of historical figures for viewers to familiarize the chronicles of past events. Truly one of the best DC TV series ever produced. Can’t get to watch its third season this coming October. You too should watch!!!