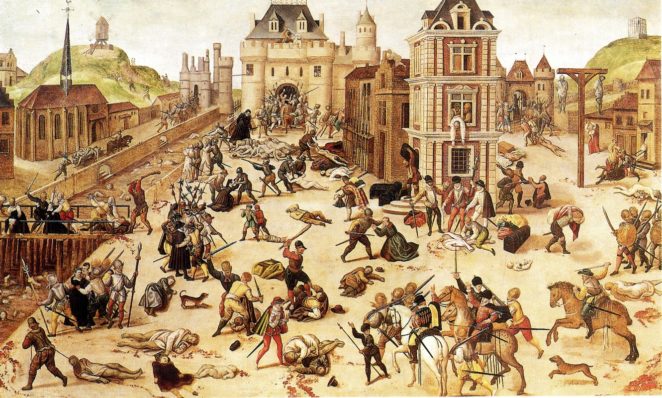 In terms of world history, monotheism is a relatively new phenomenon, although it is now the dominant force in world religion, with Christianity and Islam leading the way.

One abiding feature of the growth of monotheism through the centuries has been a massive rise in violence inspired by religion, and this is not generally something that one associates with polytheistic religions, the adherents of which seem to be generally far more tolerant of other religious standpoints.

The world has been made starkly aware in recent years of violence perpetrated by extremists claiming to be upholders of Islam, but Christianity cannot be let off the hook so easily.

Leaving aside the hatred that members of one religion might have for another, Christians seem to be particularly adept at directing their ire at members of other factions who also profess to be Christians. Historically, the 16th and 17th centuries seem to have been the high-water mark for intolerance within Christianity, with a series of religious wars being fought in Europe that led to hundreds of thousands of deaths.

Probably the most notorious incident during this period was the organized slaughter in France of Protestants by Catholics on St Bartholomew’s Day (24th August) 1572, when it is possible that as many as 10,000 men, women and children were hacked to pieces because of their “heresy”. It is worth noting that more people died because of their religion within 24 hours than in 300 years of supposed persecution under the Roman Empire.

This is the interesting thing – despite the string of stories about the martyrdom of early Christians, many of whom are remembered today as saints of the Church, there were only four relatively short waves of persecution during the Empire. In general, the polytheistic Emperors of Rome were tolerant of non-official religions being practiced in parts of the Empire, but they tended to become distrustful of people who would not include the emperors on their list of beings to be worshipped. This was mainly down to political rather than religious reasons – when the Emperor could not rely on the loyalty of a group of subjects he was likely to be suspicious of that group’s motives in terms of possible disruption to good order or even plots against his person.

We cannot let Christianity off the hook by saying that this was all in the past and everybody has been perfectly well behaved ever since, because that plainly is not true. Many examples could be cited, such as the running sore in Irish politics that derives from the distrust (and sometimes hatred) between Catholics and Protestants – these being two groups that claim to follow the “Prince of Peace” as their spiritual leader.

I am not claiming that Christianity is the sole culprit. Far from it – the split in Islam between Sunni and Shia has led to countless deaths of people with deep religious convictions, albeit the wrong ones as far as their opponents are concerned. There are many other splits within Islam that have given rise to terrible violence being visited on innocent people who had the misfortune to be born into the “wrong” sect.

One abiding factor in all this seems to be the overwhelming belief of many people that they have the sole answer, in religious terms, this being a direct consequence of monotheism. They are right in their belief, which means that everyone else must be wrong if they do not hold exactly the same opinion. If you are not my friend, you must be my foe.

Unfortunately, the seeds of intolerance yield bitter fruit, and most humans do not seem to have the intelligence to appreciate that violence solves absolutely nothing, whatever its motivation.

So what is the answer? One would like to hope that humanity will eventually come to its senses and realise that monotheistic religious belief, in which one size fits all, needs to be rejected. It would be wonderful if everyone who holds a religious belief accepted that the beliefs of others are every bit as valid as their own, and that constantly trying to persuade (or force) others to follow your religion is a fool’s errand, but what are the chances of that?

Let me end with a favourite quote (from Woody Allen): If Jesus came back and saw what was being done in his name, he’d never stop throwing up.