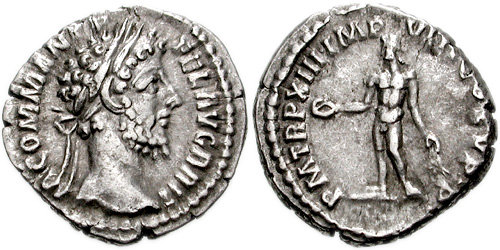 The Roman Empire was led by a series of thoroughly worthy emperors after the death of Domitian in 96 AD. According to the 18th century historian Edward Gibbon, there were then “five good emperors”, the last of them being Marcus Aurelius, who died in 180.

Gibbon began his account of the “Decline and Fall of the Roman Empire” at this point, his reason being that the next incumbent, Commodus, broke the “good” sequence with a vengeance!

Lucius Aurelius Commodus was born on 31st August 161. His father, the “Philosopher Emperor” Marcus Aurelius, did everything he could to prepare his son to be his successor by giving him the best education that could be devised, as well as involving Commodus in the business of government from the age of 15.

There was surely every hope that wisdom and justice would continue to be the guiding principles for the Empire’s future. Unfortunately, these hopes were destined to be dashed in no uncertain way.

Marcus Aurelius died suddenly in March 180 while on campaign, which meant that Commodus became emperor when not yet 19 years old.

It did not take long for people to realise that the careful preparation for office lavished on his son by Marcus Aurelius was a complete waste of time and effort. The luxuries and freedoms of high office were much more to Commodus’s liking than the heavy responsibilities that were the price to be paid, as a wise ruler would have appreciated. The real work was delegated to a series of favourites while Commodus indulged his interests, which had nothing to do with governing the Empire.

Commodus was on the throne for twelve years, during which time it became increasingly clear that he and reality were not close companions. Tyranny and cruelty were combined with a high degree of vanity – including decreeing that Rome should change its name to “Colonia Commodiana”.

However, nothing was as bizarre as his infatuation with gladiatorial combat – not just watching gladiators fighting in the arena but actually taking part! He undertook training in the arts of combat and took it extremely seriously, although with the proviso that his opponents were only allowed wooden swords!

Things reached absurd heights when Commodus imagined himself to be the reincarnation of Hercules, fighting as such in the arena and having himself portrayed accordingly when statues were made and coins struck.

However, there was nothing comic about his performance of Hercules slaughtering an array of mythological monsters, given that these were suitably arrayed disabled people who were unable to fight back or run away.

It would probably be fair to say that Commodus became a homicidal sociopath on a par with – or maybe worse than – Caligula 150 years earlier. As Gibbon would also have cause to chronicle, Commodus was not the last Roman emperor for whom this diagnosis would be appropriate, although Gibbon did not phrase it in those terms.

(Commodus pretending to be Hercules)

It was not long into Commodus’s reign before some people realised that he had to go.

Among his enemies was his own sister Lucilla, who was his senior by about twelve years. She had been well respected during her father’s lifetime, but Commodus had no time for her now that he was the emperor. She was part of a plot that involved a man lunging at Commodus with a dagger, but he was overpowered before he could strike a blow and the plotters were detected. Lucilla was banished to the island of Capri and later murdered on her brother’s orders.

Commodus stepped up his security and came increasingly to rely on Tigidius Perennis, the praetorian prefect, who took advantage of the situation to become the effective power behind the throne for the next five years. He was clever enough to make sure that Commodus got all the credit for what were actually his own wise decisions.

However, Perennis’s luck eventually ran out because he made enemies of his own, these being people who were quite prepared to poison the emperor’s mind with thoughts that Perennis was plotting against him. It was not long before Perennis was murdered, presumably on the emperor’s orders.

In a world in which paranoia ruled, a succession of favourites came and went, with each being fearful that their time at the top would not last long.

One such favourite was Eclectus, a chamberlain to the emperor, who was in a long-standing secret liaison with Commodus’s mistress, a woman named Marcia. This pair, together with Laetus, the current praetorian prefect, effectively ran the government of the Empire while Commodus was busy fighting monsters in the arena.

Commodus may have suffered from chronic paranoia but he also became careless and a document was able to reach Marcia that implied that she, Laetus and Eclectus were next on Commodus’s list of untrustworthy people to be eliminated.

Marcia had no choice to strike first and she was determined to succeed where Lucilla had failed. Her ploy of murdering the emperor by poisoning him failed, but she had an alternative plan. A professional wrestler named Narcissus was part of the plot and he was able to get close enough to Commodus to strangle him with his bare hands.

The chaotic reign of Commodus therefore came to an end on 31st December 192.

Rome became Rome once again and everything was done to erase the name and memory of Commodus from public buildings.

Unfortunately, the assassins had no plans for what would happen next as far as the succession to Commodus was concerned. A further period of chaos was inevitable.