Miguel de Cervantes wrote one of literature’s great classics, the timeless Don Quixote, which was published in two volumes in 1605 and 1615. However, a much earlier event nearly ended the author’s life before he ever dreamt of putting pen to paper.

This was the Battle of Lepanto that took place on 7th October 1571. This sea battle was fought in Gulf of Patras off the west coast of Greece. The combatants were the Ottoman Empire (the Muslim successor to the Byzantine Empire centered in what is now Turkey) and the “Holy League” of Christian states (notably Venice and Spain) that sought to restrain the Ottomans from expanding further into the Mediterranean.

Cervantes (born in 1547) was a marine soldier on board the Spanish ship Marquesa, which was part of the fleet of more than 200 ships that assembled in Sicily in August 1571 and then sailed eastwards to meet the Ottoman fleet, which was even larger than that of the Holy League. 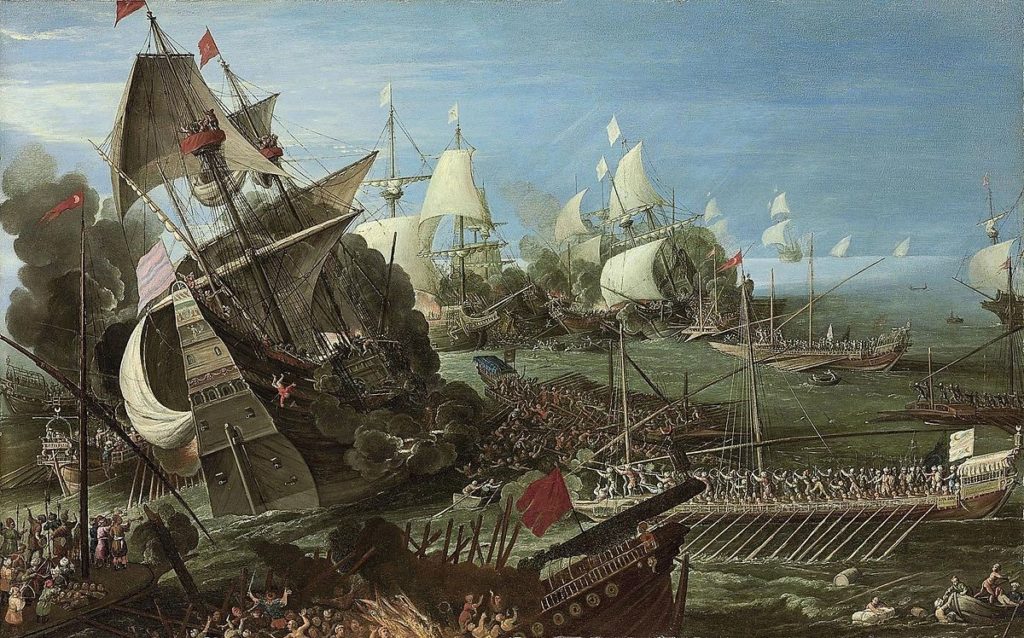 When battle was joined it turned out to be a particularly savage affair that lasted all day. Casualties were heavy, especially on the Ottoman side. Around 200 or their original 250 ships were sunk or incapacitated, with some 40,000 men killed (this being around half of their total strength at the start of the battle).

The Holy League, despite their overwhelming victory, also suffered considerable losses, probably amounting to around 10,000 dead out of their original force of nearly 70,000 men.

Cervantes had been taken ill shortly before the battle began and was suffering from a severe fever. However, that did not stop him from playing his part and he fought bravely, receiving three serious bullet wounds. Although two of these were in the chest, it was the third that had the most enduring effect because it rendered his left arm useless for the rest of his life.

Cervantes spent six months in hospital before recovering sufficiently to resume his adventurous life, which included being captured by pirates and spending five years as a slave in Algiers.

His adventures provided plenty of subject matter for his later career as a writer. He once wrote that “he had lost the movement of the left hand for the glory of the right”.