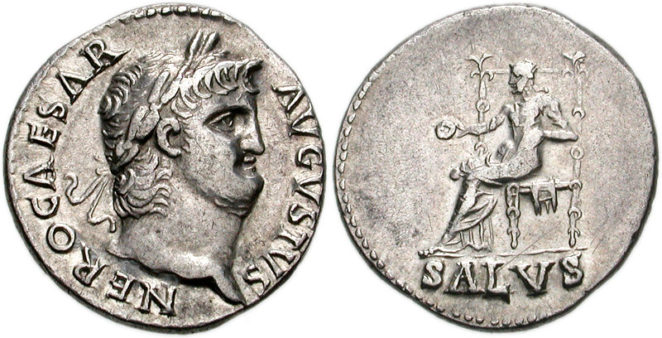 There was a crisis much closer to home in 64 AD when a terrible fire broke out in Rome. This destroyed a large area of the city, leaving many people homeless. Nero’s reaction to the fire has been the subject of controversy ever since. Some historians say that Nero organized the relief effort, whereas others maintain that he was indifferent to the suffering of ordinary people. One thing that is certain is that Nero did not “fiddle while Rome burned”; for one thing the violin had not been invented and Nero did not play the lyre-like instrument called the “fidicula” that it is thought by some was what was meant by “fiddle”. There is no contemporary documentary evidence for this incident.

However, it is not beyond doubt that Nero used the fire as an excuse to wreak vengeance on a small but growing religious group, the Christians, who could safely be blamed for starting the fire. Ordinary Romans distrusted these people, who lived in separate enclaves and conducted secret rituals, so encouraging an anti-Christian mood was neither difficult nor unpopular.

If Nero faced no opposition from non-Christians over the persecution, he did manage to raise some eyebrows over the sadistic methods he either invented or encouraged for the execution of Christians. These included smearing them in pitch and setting them alight as human torches.

Nero exploited the fire to his own advantage in that it left vast open spaces to be re-developed. He was quite happy to seize one of these to build his own “Golden House” that featured a huge artificial lake and a massive statue of himself. The later emperor Vespasian tore down the house and used the space where the lake had been to build the Colosseum.

Nero’s mental state deteriorated steadily and led to him indulging in terrible rages. In one of these, in 65 AD, he kicked his pregnant wife Poppaea so hard that a rupture caused her to bleed to death.

As Nero rapidly lost grip on reality moves were made to depose him. A plot by several senators was uncovered, leading to a new round of executions and the settling of old scores. Trumped-up charges were laid against people who had fallen out of favour, leading inevitably to their deaths. Even Seneca was forced to commit suicide.

Among the victims was Domitius Corbulo, the hero of the Parthian Wars, who had done absolutely nothing to deserve such a fate. This act, possibly motivated by envy, proved to be one outrage too far, because Corbulo was much admired and respected and had powerful friends. A new conspiracy to remove Nero was instigated that had every chance of success.

In 67 AD Nero left Rome to compete in the Olympic Games as a charioteer, with the whole event being rescheduled to suit his convenience. This was the opportunity that Nero’s enemies needed to plot his downfall. Instead of being able to return in triumph from the Games, having won every event he had entered (no surprise there), Nero found that other events had been taking place behind his back, and that they had reached an advanced stage.

In 68 AD governors in Gaul and Judaea declared their opposition to Nero. Galba, the governor of a Spanish province, declared himself emperor, gaining support including that of an army commander in Germany. When the leaders of the Praetorian Guard also switched sides, the Senate deposed Nero, who now knew that the game was up.

Nero’s only option was to flee the palace and seek refuge with a man named Phaon, whom he thought he could trust. However, Phaon had already betrayed the emperor who stabbed himself as he heard his would-be assassins enter the house. Nero’s last words were: “How great an artist dies with me!” thus showing that he was utterly deluded to the end.

Nero was a man who should never have been emperor, and this would not have happened had he not had the mother that he did. It was her murderous ambition that made Nero the heir of Claudius, and once she had fallen victim to her son he proved just how unworthy he was of such high office. The Julio-Claudian emperors had been a mixed bunch, and the last of them was arguably the worst of them all.