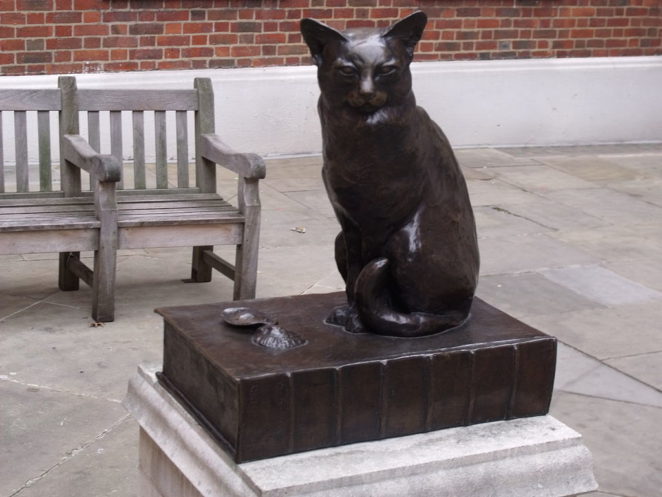 London teems with statues and memorials to famous men and women, but sometimes one can happen across one that commemorates an animal, one such being the life-sized bronze of “Hodge” in Gough Square, which is just north of Fleet Street.

17 Gough Square was the home of Dr Samuel Johnson (1709-84). Johnson was no great lover of men but was extremely fond of his cats, of which he had several. Hodge’s claim to fame was that he got a mention in James Boswell’s “Life of Samuel Johnson”. Boswell, who did not like cats, thought he would please Johnson, during a visit to Gough Square, by remarking that Hodge was “a fine cat”. Johnson replied that he had had other cats whom he preferred but then thought that Hodge was giving him a less than friendly look. He therefore tried to make it up to him by saying: “but he is a very fine cat, a very fine cat indeed”.

The statue, which is on a plinth of Portland stone in Gough Square (pedestrianised) shows Hodge sitting on top of a copy of Dr Johnson’s famous “Dictionary of the English Language”. Also on the dictionary is an empty oyster shell, which reflects the fact that oysters were Hodge’s favourite food – they were considerably cheaper in the 18th century than they are now and were regarded as the food of poor people rather than the rich. Johnson bought Hodge’s oysters in person, because he thought it demeaning to his manservant to ask him to fetch the cat’s food.

The statue (by John Bickley) dates only from 1997 and it serves a double purpose, which is symbolised by the dictionary. Inscribed on the plinth is a Latin phrase which translates as “He refined and corrected”, the “he” being Major Byron Caws, who worked with H W Fowler on the “Concise Oxford Dictionary”, first published in 1911. The statue was erected by Major Caws’s grandson and thus commemorates two lexicographers as well as the “very fine cat” of the older one.