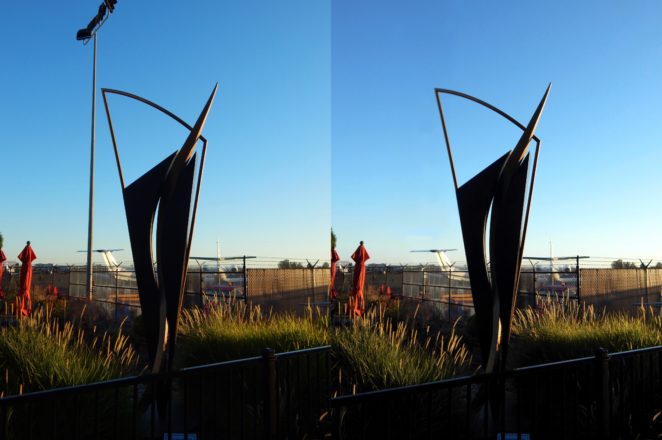 As a child my fascination with photography began because the camera could only capture what was in front of it. I knew I was looking at a depiction of what really existed at the moment the shutter clicked. It was a window to places where I had not been. It was my time machine revealing the past. I knew that I was really seeing what San Francisco looked like in 1900 for instance. It was very powerful fodder for the imagination. And, as I learned to use cameras I learned a very documentary philosophy of the photographic art form. Less reliant on filters and darkroom techniques than the luck of the eye and control of the camera to capture a real moment. So I have squirmed a bit mentally dealing with my use of digital photography and the after-camera softwares that make altering photos much too easy.

“Pictures don’t lie”.  Or, do they? They can and they do. Above is a photo of a sculpture at a small airport in Northern California. I wasn’t there at the best time of day to catch it and I may lighten the shadows later and cropping will take place. However, the point of this post is to point out the depth of my corruption by the tools that are available to me. That light pole really bothered me and so I made it disappear.  It took some time and effort with my clunky old school software; but, I did it without compunction. And, I’ll undoubtably take similar actions in the future. Over time the rules about where I draw the line between truth and fiction have become soft and fuzzy. When I look at the pictures above I am reminded of the following quote. Perhaps this is now part of my rule set for photography as well as for human nature. “The difference between truth and fiction is that fiction has to make sense”.