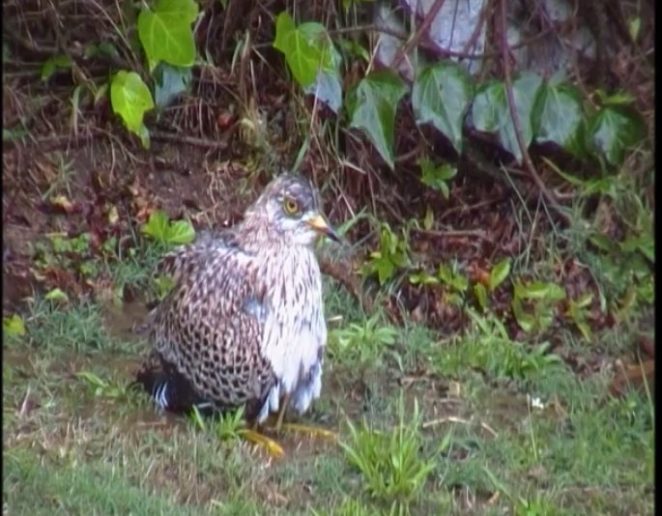 A few years ago a pair of Spotted Thick-knees (known in South Africa as Dikkops) decided to make their home in our garden. They stayed with us for two summers before deciding to move on.

One of the strange things about Dikkops is that they make their “nest” on the ground. It’s not really a nest at all – they just collect a few stones which seem to serve no purpose at all. This is where the female lays her eggs, and where she will stay for the few weeks it takes for them to hatch. Within hours of hatching the baby birds can already walk and the nest is abandoned as they quickly begin to explore their environment.

Our Dikkops seemed to get to know us quite quickly. When they first moved in they would fly away as soon as we ventured into their part of the garden. Later they would just run away to keep a safe distance, but wouldn’t fly off unless they felt threatened. However all this changed as soon as the female laid her eggs.

The second year they made their nest near a tree I was cultivating for bonsai and I had to go into their territory regularly to water my tree. This might not have been a problem, but early on I made the mistake of going to have a look at their eggs when they were close by and they were not happy about it. After that if I ventured too close to their nest the male would get very aggressive, spreading his wings out wide and hissing at me. At first I was terrified, but I soon discovered that as long as I stood my ground without trying to intrude on them they would soon realize that I meant no harm, and they would wander off.

This is a video I shot through my bedroom window shortly after the second season’s eggs hatched.