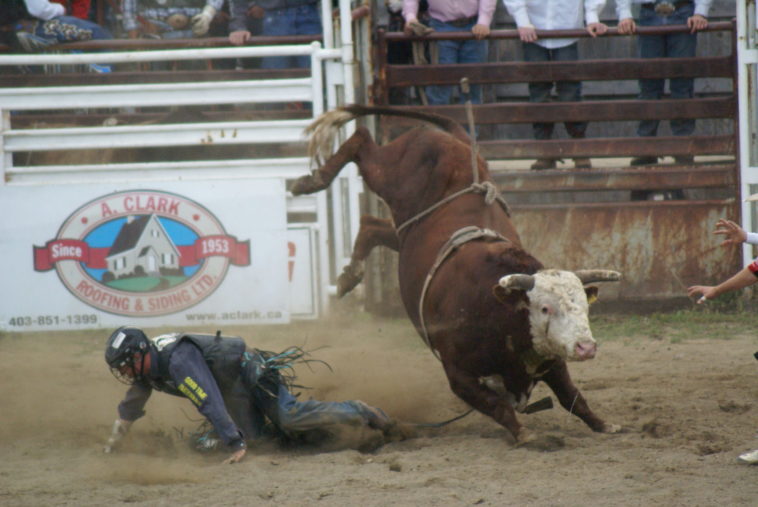 Yee-Haa..~Saddle up partner. Take the bull by its horn and hang on for your life. You aint no cowboy until you’ve tried it, so come on. hmm OR what ever???

Bull ride is an 8 second contest of strength, balance, endurance and effort between the world’s best bull riders and the world’s best bucking bulls. A rider must ride for 8 seconds with one hand in the bull rope and one in the air in order to earn a score. If the rider makes the 8 second buzzer, he receives a score. If he does not make the 8 second buzzer then he receives no score for that attempt. The bulls are competing for points and standings as well and every bull receives a score of 0 to 50 points after every ride or attempted ride whether the rider successfully made the 8 second buzzer or not.

The welfare of animals in rodeo has been a topic of discussion for the industry. Today, animal cruelty complaints in rodeo are still very much alive. The PRCA (which governs about a third of the rodeos conducted in the United States annually) has provided rules.

Ok I made this as a person, who does not approve of bull-riding.. I was dating a cowboy and I was told we were going to a animal show… Which I soon found out was a bull-ride. Ok this one, I took pictures from is a ‘allowed/ruled’ one.. Not saying that as an excuse…. So I took pictures on every time a bull WON 😉

As you see, BULL for the win & Karin the only one cheering 😉

Again point for bull, the next serie of photos, I do have(did not share) the bull hunting the cowboy < Karin has her evil grin on her face.

Out of the gate… wait for next picture

See? It took the bull less then 3 seconds to get icky cowboy OFF!

and that is OFF into the fence…..

A beautiful bull❤ all proud and massive, can I please get a hands UP for bulls❤

and hands down for bull riders… ?