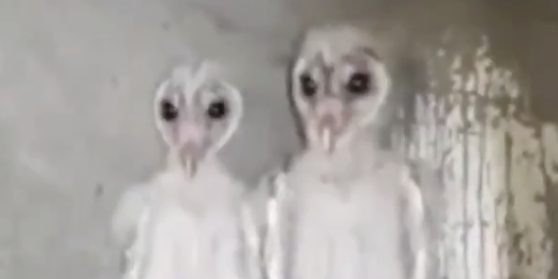 The internet is veering with stories of a man from India  who found aliens in his attic. This happened a couple of years ago as well.

People on twitter are convinced that it is a picture of aliens. However ornithologist have ruled out the possibility. They say these are baby eastern barn owls. These have a weird growing up process. Unlike chicks and ducks these birds are born without their fluffy down feathers.  Their white down feathers that grow after birth give them a ghost like appearance.

It takes about three weeks for these baby birds to start looking like owls. The owls in the picture seem like they are right out of a alien movie. They have been started by the human interruption and they have backed out with their wings at their sides and they seems like humanoid on bony legs.

Owls do have very long legs,” explains McGowan an ornithologist. “They do look much more upright than I would expect.’ We are used to seeing  owls perched on a branch with feathers hiding their legs. We are familiar with birds flying in the sky. Its their posture that gives us these ideas of aliens.

Well I am convinced that these are started birds. Conspiracy theorist get some sleep. You will see things in a better light tomorrow.