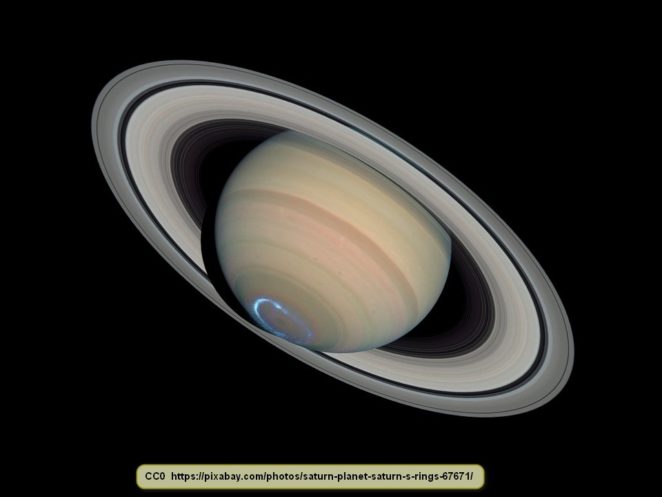 With its huge ring system, Saturn is considered to be one of the most beautiful planets in the solar system. It is interesting in other ways, too. For instance:

* Saturn is the second-largest planet and although dwarfed by Jupiter and much more distant, it is the most distant planet that we can see with the naked eye.

* The diameter of Saturn is about 11 times that of the earth. Despite this, Saturn rotates much faster than the earth. It takes a little more than 24 hours for the earth to rotate once, while Saturn rotates once every 10 hours, 14 minutes, approximately.

* Because of how fast Saturn rotates and the fact that it is almost entirely made of hydrogen (96%), with a small amount of helium and methane, Saturn is easily the most flattened or squished planet in the solar system. That is, it bulges in the middle. This is true of all the planets, but none are as flattened as Saturn.

* Even though Saturn is made of mostly hydrogen, it is so huge that it has a mass that is 95 times greater than that of Earth.

* Scientists don’t know how or when Saturn’s rings were formed. However, from the outermost ring to the innermost ring, the rings stretch for about 282,000 km. Yet, the rings are only about 10 meters thick. That is about 30 feet. Because of how thin the rings are, at times, they appear to vanish, when we see them edge-on.

* Saturn orbits the sun at a distance that is about nine and a half times farther away from the sun than the earth is. It takes approximately 29.5 years for Saturn to go around the sun one time.

* Saturn was first discovered, historically, about 700-800 years before the birth of Jesus and it was known to the ancient Assyrians, Babylonians, and Greeks.

* Saturn has at least 62 moons, although some of them are tiny; only a few hundred meters across. Not all of them are small, though. Saturn has the second-largest moon in the solar system; Titan, which is only exceeded in size by Jupiter’s moon, Ganymede. Both Titan and Ganymede are larger than the planet Mercury.