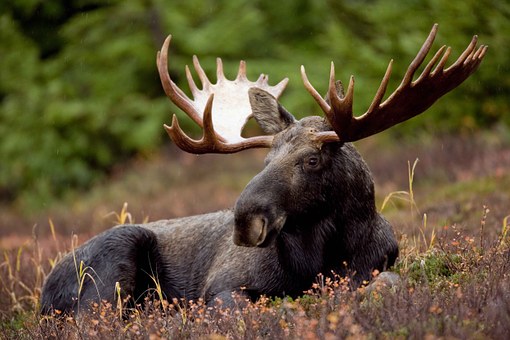 The moose is another one of my favorite animals.  When we were in Maine we looked at all the favorite “moosey” places until our eyes ached but never saw one.  We did see some droppings and some footprints along a trail at another location; but that’s as close as we came!

The moose is the largest and heaviest in the deer family.  There are several different species; but with the moose in the Eastern United States and Canada males average 800 lbs. and 6.5 feet high at the shoulder!!!  Females are around 600#.  They are very large animals!  The males differ from deer that you normally see because they have open-hand shaped antlers rather than the “twig” type antlers.

Their diet consists of terrestrial and aquatic vegetation.  Their most common predators are the gray wolf, bears and humans.  They are normally solitary animals.  In Maine and New Hampshire there has been a 70% calf death due to the Winter Tick.  With an infestation the moose rub against a tree until their hair is rubbed off, making them more susceptible to hypothermia.