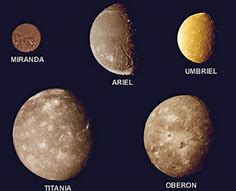 The planet Uranus, the orbit of which lies between those of Saturn and Neptune, has several features that set it apart from the other planets. One of these is how its moons are named.

All the moons of the other planets (leaving aside Planet Earth) are named after characters from Greek and Roman mythology. The moons of Uranus, however, owe their names to English Literature.

Uranus has 27 known natural satellites. The first two were discovered in 1787 by William Herschel, who had also discovered Uranus itself, in 1781, from observations made through his telescope set up in the back garden of his home in Bath, Somerset.

William Herschel’s son John named the moons Titania and Oberon in 1752, the names being those of the king and queen of the fairies in Shakespeare’s “A Midsummer Night’s Dream”.

Two more moons had been discovered by William Lassell in1851, and he asked John Herschel to suggest names for them. He came up with the names Ariel and Umbriel, who are characters in Alexander Pope’s poem “The Rape of the Lock”.

As more moons were discovered, the tradition of using names from literature was continued, with nearly all the new names being from Shakespeare. The sole exception was Belinda, discovered in 1986, which was another “Rape of the Lock” character.

Thirteen Shakespeare plays have supplied characters’ names for those of Uranian moons, with the greatest supplier being “The Tempest” with nine – or ten if you allow Ariel, who is a character in both “The Tempest and “The Rape of the Lock”.

The theme has also been extended to naming surface features on the major moons of Uranus, with the convention being that craters are named after characters and other features after place names and locations in the plays.

The convention was, however, broken with the moons Ariel and Umbriel, the craters and surface features of which take their names from various world mythologies.

Another oddity about Uranus is that it is the only planet that takes its name from Greek mythology. All the others (apart from Earth) were given the Roman versions of the names of gods or goddesses.