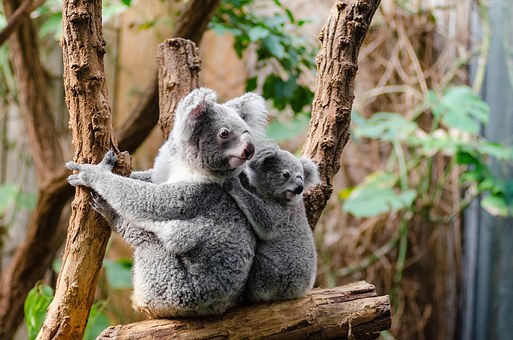 The Koala or Koala Bear is an herbivorous marsupial native to Australia.  Its closest living relative is the wombat.  It lives in coastal areas of the mainland’s eastern and southern regions in Queensland, New South Wales, Victoria and South Australia.  The Koala is stout and has a tailless body and large head with round, fluffy ears and a large, spoon-shaped nose.

Koalas range from 24-33 inches long and weigh from 9-33 pounds; the males are 50% larger than the females.  Colors range from silver grey to chocolate brown.  Koalas in the north are typically smaller than those in the south.

Their habitat is open eucalyptus woodlands; and the leaves make up most of their diet.  They sleep up to 20 hours per day because their diet has a limited caloric and nutritional value.  They have little fat reserve; so they must feed often.  They are usually active at night.

Koalas give birth to underdeveloped young (joeys) that crawl into their mothers’ pouches and remain there for the first 6-7 months.  They have few natural predators but are threatened by dingos and large pythons; and birds of prey will go after the young joeys.  They can also be infected with Chlamydiaceme bacteria, koala retrovirus (similar to human AIDS), and threatened by bushfires, drought and habitat destruction.

They have a relatively small brain, probably due to their diet restrictions.  They have a limited ability to perform complex, unfamiliar behaviors.