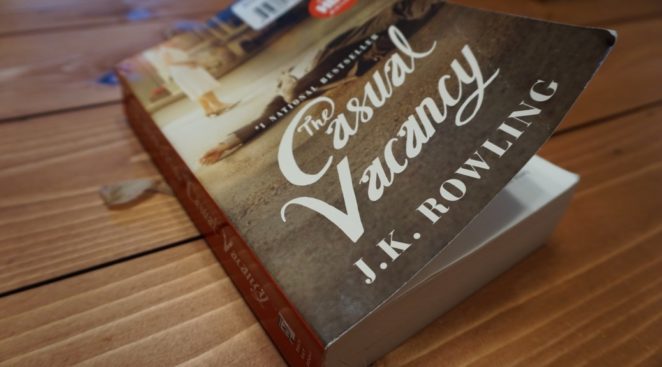 Joanne Rowling, famous worldwide for her Harry Potter books, which have sold over 500 million copies. Harry Potter books and their screenings have become the bestselling series of all time. All books are translated into over 70 languages worldwide, including Latin and Ancient Greek.

This time, though, not about Harry Potter. I read a book for adults, The Casual Vacancy by J. Rowling. There is really no magic, tricks or imaginary struggles in this book. It describes the struggles of ordinary people in a small town in England to deal with life and its problems.

In the unexpected death of one township council member, there is an empty space that someone has to occupy. Intrigue and deception begin. The book raises the political and social problems of the inhabitants of the English province.

In the beginning, the book was difficult to read because it had many different characters. But once I got used to the author’s writing style, I wanted to read it as soon as possible.

Although the book is really depressing, it accommodates more of the everyday problems of a small town (silent gossip, silent unspoken hate) than the joys. There is a lot of focus on rebellious teens, their relationships with adults, their relationship with their parents…

The characters and their circumstances are described in a very masterful and convincing way. The feelings and thoughts of all the characters are just perfectly described. If you live in a small town or village, you will surely understand it.

“The choice is a dangerous thing: you have to give up all other occasions when deciding.”