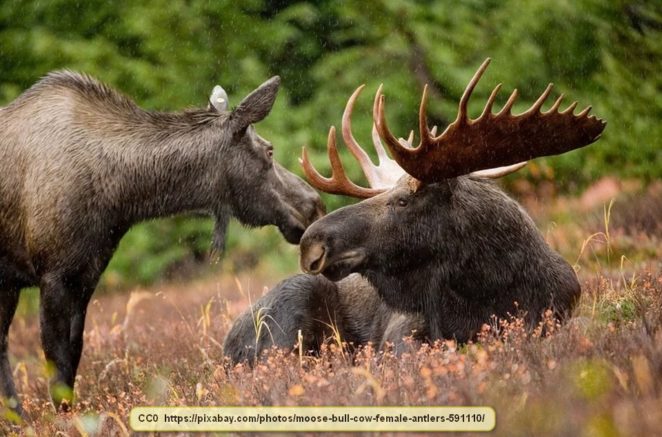 I’ve mentioned that my nephew brought me some meat and among the meat he bought were some packages of moose meat. However, it occurs to me that many people may not know much about moose because these creatures live in northern temperate to sub-artic areas. Most people live in warmer areas where moose aren’t observed. So I’m going to give some of what I think are interesting moose facts.

Incidentally, the word “moose” is both singular and plural, as is the word “deer”. Whether you are referring to one of these animals or many, the word to use would still be ‘moose’. Moose don’t form herds like other deer, though.

* Moose are found in the north temperate and sub-arctic areas on both sides of the globe, primarily in Russia, Canada, and the US. In Europe, they are often known as elk and what we call elk here in the US is known as wapiti (interestingly a Native American word) in Europe.

* The moose is the largest species of deer and that is understating it. A full-grown male or bull is often around a half-ton in weight, up to 7 feet tall at the shoulder, and up to 10 feet long.

* The bulls have enormous antlers that often span 6 feet from one side to the other. The antlers are shed every year and new ones are grown, as with other deer. Because of the size, though, the antlers must grow rapidly and in fact, they grow faster than the antlers of any other deer.

* Moose are semi-aquatic and eat a great number of water plants, including those found on the bottoms of lakes. A moose will often walk along the bottom of lakes eating as they go. They are capable of swimming, though, and their hair is hollow, which gives them buoyancy and insulates them against the cold. In fact, the heat is more of a threat to a moose than the cold is. They can easily withstand temperatures lower than -50° F, but can die of heat exhaustion and heat stroke at temperatures of 70°.

* When there is a need, a moose can run quite rapidly; as fast as 35 mph. In fact, a calf that is only 5-days old can easily outrun a man.

* Like other deer, moose have excellent hearing and sense of smell, but they have relatively poor eyesight.

* Moose are the state animals of both Maine and Alaska and the national animal of Canada and Sweden. They can be cranky, though, especially if provoked. More people are attacked by moose than by wolves and bears combined. The only animal that injures more people yearly, worldwide, is a hippopotamus.

* Moose are commonly hunted, though hunting regulations tend to be strict, and this animal is not threatened because their population is stable.

There are some interesting facts about moose for you to think about today.