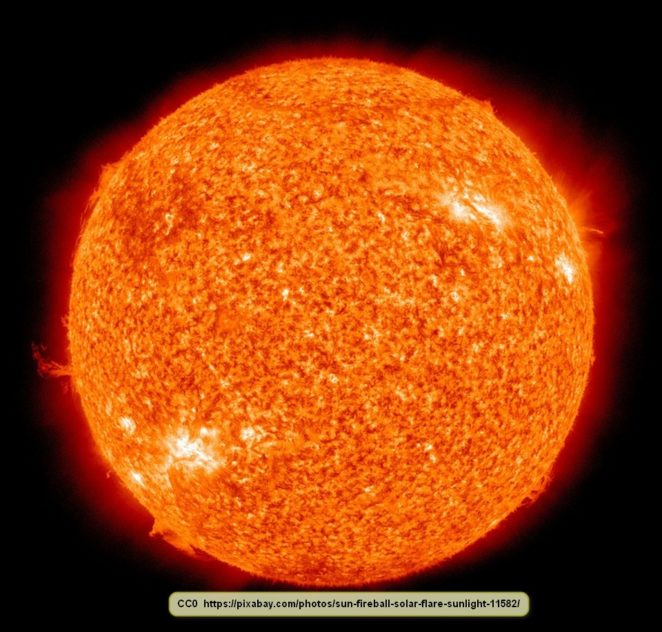 The sun is totally amazing in many ways. Yet, it also poses dangers and though many people are aware of them, many people aren’t. Considering the multitude of other concerns that dominate culture, it is wondered how many people actually worry about our sun.

Our sun, though not a particularly large star, is enormous. It is big enough that 1 million Earths would fit inside of it. In fact, over 99% of the mass of our entire solar system, counting planets, moons, asteroids, comets, dust, and gas, is contained in the sun.

The sun is mostly ionized hydrogen. Hydrogen consists of a nucleus of one proton, with one electron circling it. When it is ionized from the extreme heat and pressure, the electron is stripped away. In the core of the sun, the hydrogen is forced together to produce ionized helium. The process produces a photon (a particle of light) and radiation. Every second, about 4 million tons of hydrogen is converted into helium in the core of the sun. Considering that hydrogen is the lightest element, that is an amount of hydrogen that is almost impossible to imagine. Yet, the sun is so large that it has been converting roughly this amount of hydrogen every second for the past 4-5 billion years and still has enough to continue doing so for another 4-5 billion years.

The output isn’t steady, which means that fluctuations could easily account for variations in the earth’s climate over the past millions of years. “Climate change” has been a major topic for some decades, yet few people, except for scientists, even worry about the major role the sun plays. Few people worry about it. However, this isn’t the biggest worry facing mankind.

Periodically, vast amounts of gas and radiation are blasted out from the sun. These solar mass ejections can move out in any direction, too. In the past few years, there have been quite a few major solar mass ejections and thankfully, none of them have been directed right toward the earth. The earth has only been grazed a few times, just enough to have a large effect on the magnetic field of the earth and to cause minor disruptions and both northern and southern lights.

The main problem would come if one of the big solar mass ejections came directly toward Earth and impacted with us.