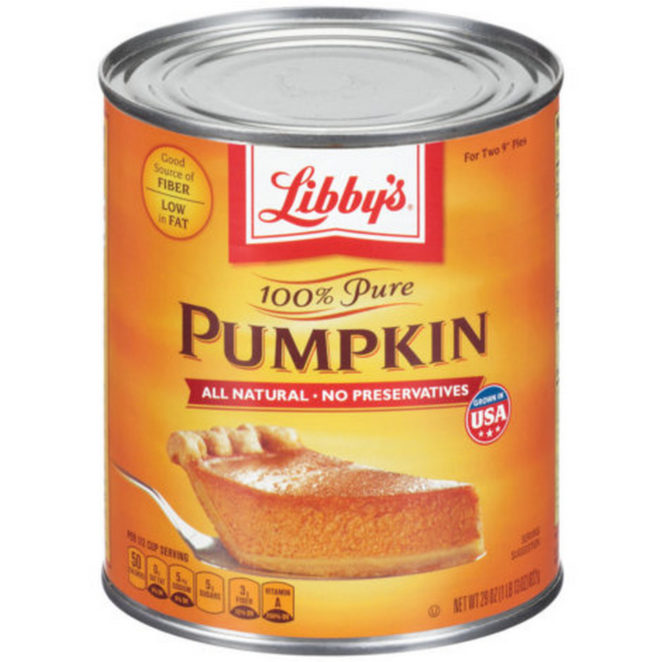 Yesterday, I wrote about how pumpkin-flavor and scents don’t come from pumpkins, they come from pumpkin pie spice; cinnamon, cloves, nutmeg, and ginger. Pumpkin has very little flavor or aroma on its own, particularly once it is cooked. However, did you realize that most pumpkin pie that you might purchase or make doesn’t actually have pumpkin in it?

Pumpkin puree that is sold in cans at the store rarely has any pumpkin at all in it, even if the label claims that it is made from 100% pumpkin. What is it, you might ask? Store-bought canned pumpkin puree and pies that are subsequently made from the puree most often contain butternut, Hubbard, Boston Marrow, and Golden Delicious squash. All of these are in the same family as pumpkins and in fact, cucumbers are also in the same family, but none of these are pumpkins.

Squash is normally used because it has a richer, more robust flavor and a deeper color. (It is also less expensive to grow than pumpkins.) In fact, if you make pumpkin puree at home, you’ll likely find that the color is somewhere between light tan to very light yellow. Food coloring is often needed to give the puree the deep golden color of pumpkin pie. Squash tends to be a deeper color and there is less variation in the color or flavor.

A person might wonder how companies can legally label that the product is made from 100% pumpkins. The reason is that the United States Department of Agriculture is very lax in regard to what can be called ‘100% pumpkin’. To be more specific, this is the USDA guideline for what pure pumpkin is:

“The canned product prepared from clean, sound, properly matured, golden-fleshed, firm-shelled, sweet varieties of either pumpkins and squashes by washing, stemming, cutting, steaming, and reducing to a pulp.”

I’ve mentioned that I sometimes make pumpkin pie from zucchinis and that very few people can tell that there is no pumpkin in the pie. This might sound amazing. However, unless a person has actually gone to the effort of rendering a pumpkin into a puree and then used that puree to make pumpkin pie, it is entirely possible and likely that they’ve never actually tasted real pumpkin pie.

Note that zucchini, which I use, is normally not used for the store-bought puree and if it is, it can’t be labeled 100% pumpkin. Zucchini isn’t golden-fleshed or firm-shelled. Golden-fleshed, firm-shelled squashes are winter squashes and zucchini is a summer squash with very light-colored flesh and it is soft-skinned.

Still, it shouldn’t be a surprise that I can so easily fool people into thinking that my zucchini pie is actually pumpkin pie, though I don’t actually tell anyone that it is pumpkin pie and if asked, I will be honest and say what it is made with. It is quite probable that the pumpkin pie you’ve eaten and thought was pumpkin pie was actually squash pie. Nutritionally, it is no better or worse than pumpkin, it just isn’t pumpkin.