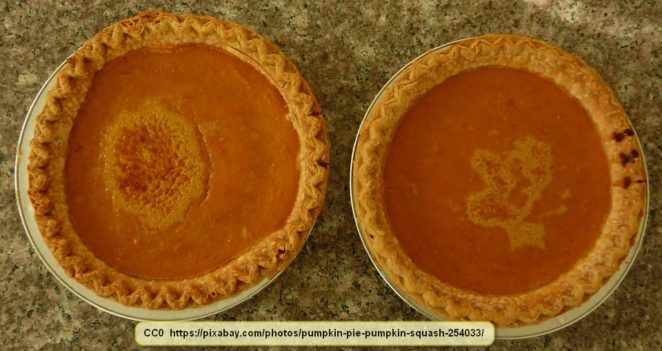 Another question I received not long ago was actually a good question, though it was based on an incorrect notion. The person wanted to know how there could be pumpkin-flavored ice cream, latte, cookies, and so forth before any pumpkins were harvested.

The answer is simple, and it has nothing at all to do with the harvest of last year’s pumpkins. To sum it all up simply, “Pumpkin-flavor doesn’t come from pumpkins.” Many of you probably already know this.

What most people think of pumpkin-flavor comes from the spices that are added to pumpkin in order to make pumpkin pie or whatever. Anybody who has tasted unseasoned cooked pumpkin has probably noticed that it is incredibly bland. It lacks flavor and isn’t a great deal more flavorful than paper.

What makes the difference in pumpkin pie is the cinnamon, nutmeg, ginger, and cloves that are added. That combination is what yields what people think of as “pumpkin-flavor”. In other words, it isn’t pumpkin-flavor at all and isn’t dependent on pumpkins.

I make a really good pumpkin pie that contains no pumpkin at all. It is made with zucchini squash. Nobody can tell that it doesn’t have pumpkin in it. It is actually more flavorful than pumpkin pie because, although zucchini is also bland and takes on the flavors of what it is cooked with, it still has more flavor than pumpkin.

The point is that the taste and aroma of ‘pumpkin-flavor’ don’t come from pumpkin, it comes from the spices that are used to flavor pumpkin pie.