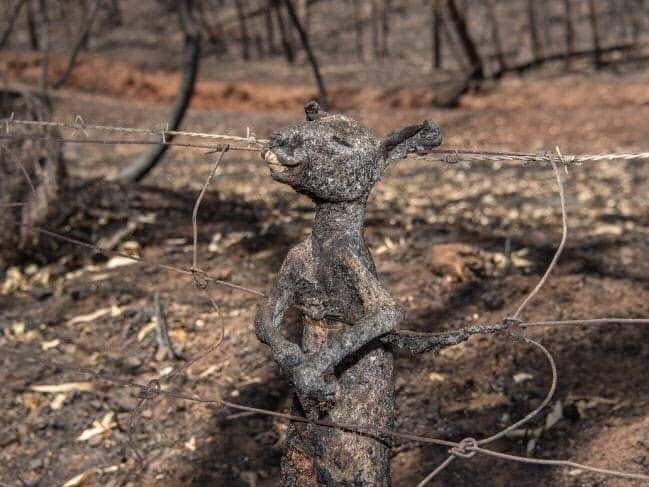 In Australia, the fire has continued since the fall, but does not even begin to shrink, as it is only the beginning of the hot season and may take months.

In Australia, the fire has already burned 12 million ha of the forest – the area of two Lithuania I am living. It is hard to imagine the size of dead land there. Let’s pray for the rain.

Many people in Australia are no longer able to live. Thousands of homes burned down. We have been told that the climate crisis will increase the cataclysms of nature. But have we imagined such horror? Could anyone have predicted that the prime minister could fly out to Hawaii for a  vacation when his country is burning?  That celebrities would care more about collecting donations than the government? That fires will be extinguished by volunteers who lack gas masks?

It was so scary for me today to watch the whole action out of my cozy happy bubble. Australia and its government’s sluggishness are a reflection of the world. Australia, the country I always thought to fly if the end of the world comes…

Donate money. Share the message. Write letters to the local municipality on the climate crisis. To radically change consumption patterns. Slow down the pace. Open the heart. Rise to the next level of awareness. First of all, I wish it myself. Today I cried when I watched the news. Then I was out to dinner at a fancy restaurant. I ate as if tomorrow will not come. And if it comes, I will try my best to make life better for my children tomorrow. I promise.

But all I could do now was to find fundraisings for Australia fire fighting in FB and donate some money.

We imagine themselves as omnipotent gods, but against nature, we are all powerless. When there will be enough space under the sun for our governments, we will not be investing in the defense: then Australia, Amazon will not start burning, and Africa will stop starving. Only then it will not be a misfortune of one country because others will rush to help. And so far, however, we are burning, drowning, starving…