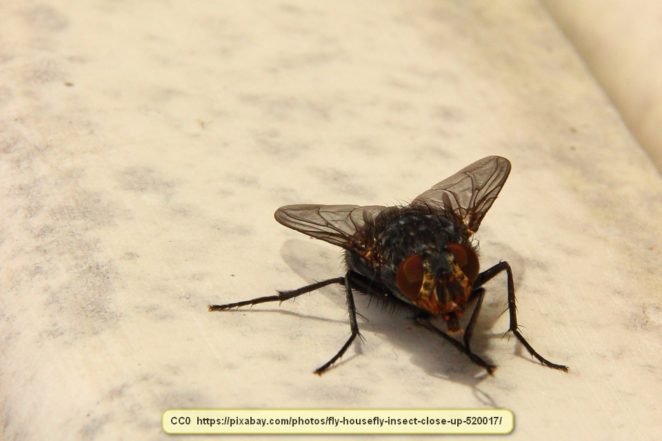 Some time back, I was asked why flies rub their front feet together. It is likely that many people have wondered about this and the question is an interesting one. The answer is equally interesting.

First, it should be said that not all flies rub their feet together. Mosquitoes, horseflies, and deerflies are all flies that don’t do the whole rubbing thing. House flies certainly do, though. It almost gives them the appearance of planning something.

Of course, that is an illusion. Insects don’t ‘plan’ anything. They have only the most basic, rudimentary brains that are incapable of thought or planning. They merely react on an instinctual level.

So why do houseflies rub their front feet together? They do it for the sense of taste.

A human does something similar, though they don’t use their hands to do it. They might take something into their mouth and roll it around in order to get an idea of its true taste. This is the reason that wine-tasters take a sip of wine and swish it around in their mouth, then spit it out. They are getting the full taste of the flavor of the wine.

Here is the thing, though. Houseflies don’t have taste buds in their mouths. Their taste buds are on their feet. Every time a housefly lands on something, they immediately taste it. When they rub their feet together, they are doing the same thing that humans do when they roll something around in their mouths; getting a more accurate sense of what something tastes like.

Again, they aren’t actually thinking about the taste, they are acting at an instinctual level, but that is what they are doing.

Creatures of all sorts are fascinating, aren’t they?