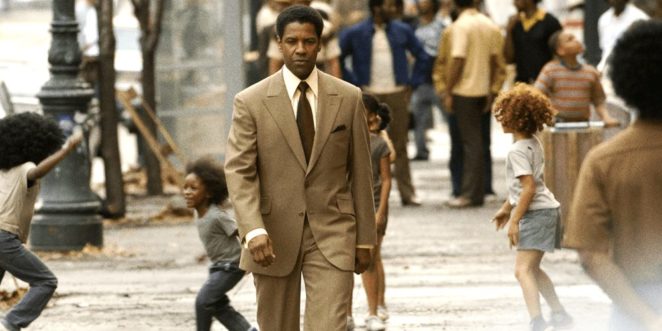 Frankly, I always liked crime dramas, especially I liked this genre after watching many films of Denzel Washington, one of my favorite actors. The best crime thriller I’ve seen, I consider Training Day, for which Washington won an Oscar.

Ridley Scott’s “American Gangster” is perhaps the best film in Denzel Washington’s career since the aforementioned Training Day. This is a movie that captivates from the first shots, and which can often be reviewed – it does not bother you. I’ve watched it 2 times already, and with each viewing, I like the film more and more, therefore it occupies a worthy place among my favorite films. But it is worth stopping and taking a closer look at all the main merits of this film.

The atmosphere of the film, the surroundings and the era of the 70s, when the Vietnam War was drawing to a close, and the whole of America sat on the heroin – all this was recreated by the director superbly. It seems that the duration of the action here is a full-fledged character – in such a detailed and meticulous manner, Scott recreates the spirit of that time, the atmosphere. In general, the 70s in the film are shown quite qualitatively and realistically.

The very action of the film turned out to be very exciting and evenly broken between the two main characters performed by Crowe and Washington, to whom the screenwriter tried to devote an equal amount of time.

The cast in the project is simply gorgeous, and not just because the film starred the two Oscar-winning Denzel Washington and Russell Crowe. On secondary roles, stars such as Carla Gugino, RZA in the role of a funny cop, Cuba Gooding Jr. and Idris Elba flashed here. The character of Josh Brolin turned out to be very vivid and memorable – a corrupt cop from the Department of Special Investigations, who at every convenient minute is ready to show himself and to take out extra money.

Denzel Washington in the role of the mafia boss Frank Lucas looks great. It seems that he should inspire hatred, but nevertheless, Washington has a positive character. An exemplary family man and a successful businessman, even if his business is built on the lives of people. However, Denzel in his character immediately shows two completely different features: such a seemingly calm and kind person can easily turn into a cruel and fiery gangster. And this transformation is shown by Denzel perfectly.

Russell Crowe is held at the partner level as an honest police officer, Richie Roberts. He plays a real policeman, albeit hated by his colleagues for his honesty. He is like an outcast, but worthy of respect. He responsibly takes his work and he will stop at nothing in achieving his goals. In general, Denzel Washington and Russell Crowe turned out a chic acting duet.

Bottom line: “American Gangster” – a great crime saga in every way. A wonderful soundtrack, excellent acting, and a truly chic acting duet by Denzel Washington and Russell Crowe will be, for me, many reasons for re-watching the film. And this film is clearly one of those that usually remain on your favorite movie lists.