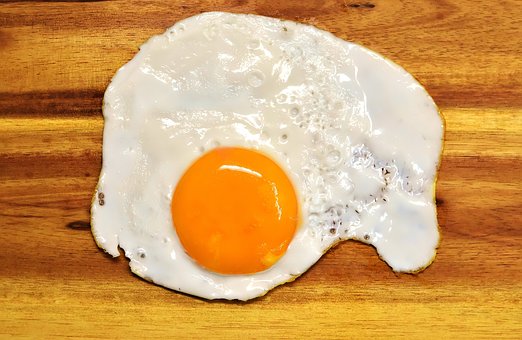 Eggs are laid by female animals of many different species, including birds, reptiles, amphibians, mammals and fish, and have been eaten by humans for thousands of years. The most commonly consumed eggs are chicken eggs.

We all know about the ongoing debate regarding how many chicken eggs you can safely eat per week to remain healthy…and I don’t presume to keep up with the ever-changing opinions. Chicken eggs are not one of my favorite foods, although I do like them deviled, in egg salad or scrambled (my way).

There are approximately 6.4 billion hens laying eggs worldwide (as of 2009). In 2012 battery cages were banned by the European Union due to their inhumane construction. They are barren, restrict movement, prevent many natural behaviors, and increase rates of osteoporosis (a disease which causes bone weakening).

Some of the ways that eggs can be served are hard-boiled, soft-boiled, fried, “over-easy”, pickled and in omelettes and frittatas and are eaten for any of the three meals or as a snack. They are also used as ingredients in countless recipes, including drinks such as eggnog.  There are recipes for cooked eggnog; and I would highly recommend them because of the risk for salmonella by consuming raw eggs.

Some of the other popular eggs that are eaten are quail, ostrich, caviar, roe and duck. The ostrich egg has a shell that is approximately 1/8″ thick; and the contents are equal to two dozen chicken eggs. One ostrich egg can weigh 3-1/2 to 5 pounds!

Eggs are very nutritious and contain a good amount of protein, choline and other vitamins. Choline is good for brain development and brain function. Eggs are also easy to digest.

The white of the chicken egg contains about 90% water and 10% protein. The yolk, while containing more protein, is also high in fat…therein lies the controversy regarding total consumption due to cholesterol content. There are also issues due to egg allergies. The yolk contains approximately 60 calories and the white approximately 15.

We’ve all licked the spoons and mixer blades while baking; but you should never eat a raw egg as there is a risk of exposing yourself to salmonella, as stated above.

Thank you for stopping by. I hope you enjoyed learning a few things about the egg!