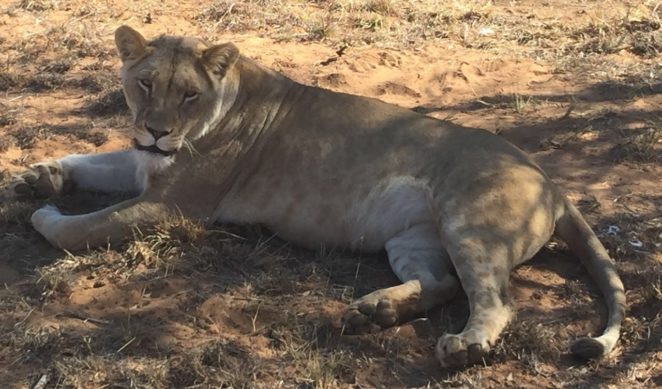 This region is very dry, but the reserve has healthy looking game and offers a lot of fun activities from game drives to 4×4 adventures, quad biking, horse riding, swimming, clay pigeon shooting, and mountain bike trails.

The reserve houses a wildlife sanctuary that cares for a variety of different birds and animals that find themselves in need of extra care for a number of reasons ranging from injury to rehabilitation and quarantine.

We visited the wildlife sanctuary for a one hour guided tour that was most rewarding and very interesting.

Trigger, a male cheetah, is Sondela’s mascot. He is relatively tame as he was raised by humans since he was a cub. Wild cats, no matter how tame, view children as prey, and our guide had to ask the children in our group to stand away from the fences.

When our friend took this photo he went down on his haunches, this made Trigger agitated; the hair on his back stood up and he growled and hissed. Never underestimate the wild that is left inside the heart of an animal, no matter how tame they may appear.

This is Nala a two year old lioness. She was born premature and rejected by her mother. She was also hand reared. Unfortunately she was abused by her rescuers and had to be rescued again.

Sticking your finger through the fence is not a good idea, but in this case the finger belongs to our guide, with whom Nala is familiar. We were warned several times not to try and touch her.

Nala shows off her impressive fangs during a big, lazy yawn. They tried to introduce a mate, but she almost killed him. The game wardens had to tranquilise Nala in order to rescue the male. Maybe she’s waiting for Simba.

This adorable creature is a six month old puma cub. One of the children in our group lay down on ground by the fence of the cub’s cage. As young as he is, the cub went into a crouch position and started stalking the child. Our guide had to tell the boy to stand up.

This White Bengal Tiger is only nine months old. He’s in quarantine. He was lying lazily in the shade, not giving us any great photo opportunities, until a pig wandered past his enclosure. I’ll tell you all about that pig in a moment.

Here we have an African Caracal, also known as a Rooikat in Afrikaans (which directly translated means red cat). A pair of sibling caracals are permanent residents at Sondela’s wildlife sanctuary.

There were lots of other animals at the sanctuary including a wildebeest who decided she preferred human company to that of her fellow antelope; she chose to stay at the sanctuary even though the game rangers have tried to release her various times.

A lot of the sanctuary’s inhabitants are birds of prey, ranging from eagles and buzzards to hawks, kites and owls, most of them have injuries to their wings. Sadly many of them have had to have one or both wings amputated, so they will have to remain in captivity for the rest of their lives. The damage is caused when the birds fly into electricity cables or fences.

Of all the animals we saw on our tour of the sanctuary, the ‘wildest’ of the lot was Benni.Benni is a cross between a warthog and a pot-bellied pig. I can’t help but wonder how that happened?

Did Mr Warthog spy Ms Pot-belly and decide that the difference between them was only skin deep? They are both swine after all. I can’t imagine it happened the other way around … Mr Pot-belly trying his luck with Ms Warthog. Who knows? I never had the opportunity to ask.

We were waiting for the tour to start when Benni took a liking to our friend’s foot. He grunted and squealed as he licked.

Some of us were sitting, others stood, as we chatted and watched Benni with amusement.Gavin, my hubby, was sitting down so he could see the pig’s “under-bits”.I heard him say, “Graham, you’d better move your foot.”Graham said, “No it’s okay, I don’t mind.”

Other people, who were also seated, began to giggle and one of the children exclaimed, “Euw what’s that pig doing?”

Only then did Graham move his foot, and just in time mind you!

Apparently Benni enjoyed the encounter with Graham’s foot far more than one would anticipate – it was a climactic event!

The amorous encounter has provided us with yet another fabulous campfire story to tell for years to come.