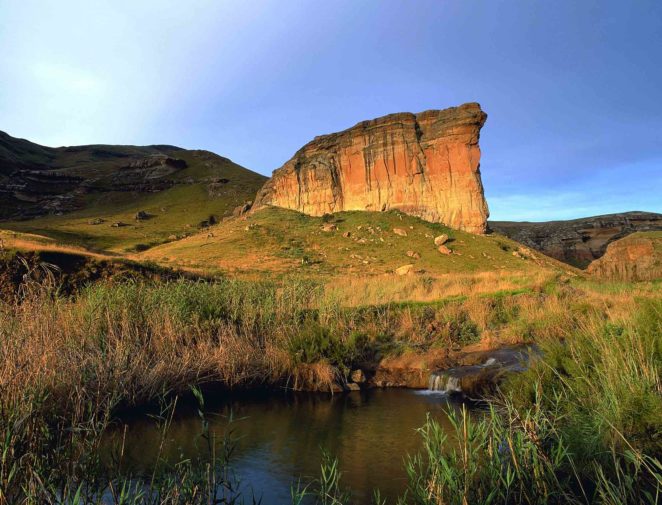 Famed for its golden sandstone outcrops, the Golden Gate Highlands National Park in the Free State province is a magnificent family venue for people who enjoy open spaces. Situated in the foothills of the Maluti Mountains of Lesotho, the park is well known for its breathtaking landscape and abundance of caves.

In 1973, Fossilised dinosaur eggs and skeletons were found, dating back to the Triassic period in Golden Gate Highlands National Park.

The park is renowned for its rare scenery and loved for the golden glow coming from where the sun’s rays strike the sandstone outcrops and cliffs. The Golden Gate Highlands National Park is within very close proximity to Johannesburg, Bloemfontein, and Durban and the park is the perfect breakaway for those longing to breathe fresh mountain air, stretch their legs, and to allow nature to restore a healthy balance. Golden Gate is South Africa’s only grassland national park.

Aside from its variety of resident grasses, the park’s most notable features are its unique sandstone outcrops and cliffs which display many colored bands, eroded by the rains and sands of time.

About 30 Millions of years ago, the park area was a swampy delta overrun by many dinosaurs. Later, sand and the wind had scoured the landscape into a desert and sculpted the park’s renowned golden-coloured buttresses. Volcanic activity eventually capped the landscape with dark peaks, known as Drakensberg Basalt, and the mineral-enriched soils finally gave rise to the establishment of a multi-species of grassland biome,  which the park was proclaimed for– the park has more than 50 species of grass.

Several species of game, black wildebeest, eland, blesbok, oribi, springbok and Burchell’s zebra graze its diverse grasslands. The rare bearded vultures constantly circle the skies above the hidden pathways of the San hunter-gathers, who once occupied the park’s caves.

Explore the largest of these, the largest cave called Cathedral Cave, can be easily reached on a guided walk. This huge cavern was once used by Basotho worshippers and later, by Boer refugees in the Anglo-Boer war,  seeking shelter.

The Brandwag cliff, or Ribokkop, is the highest point in the park. You can spend the night in the wilderness on the two-day, one night Rhebok Hiking Trail or visit the Vulture Restaurant; mountain bike, horse ride or go on a game drive;  Make time to stop so you can absorb the park’s magnificent stillness and panoramic views.