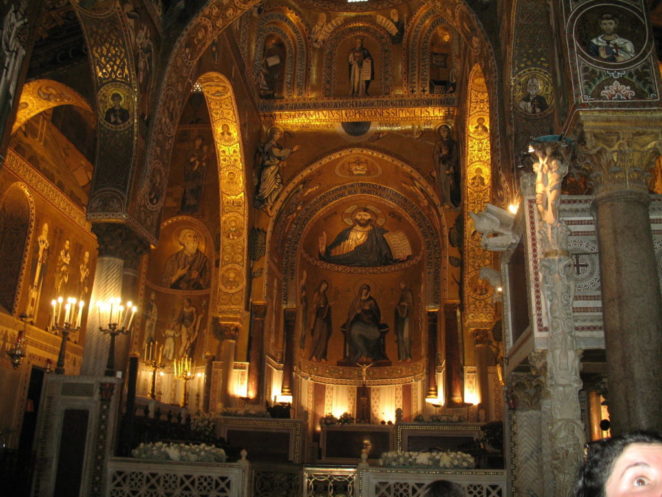 Back to Palermo!  I wish that I had never left!  If there was a space-age way to transport furniture overseas, I would do it in a second. I would take dual citizenship if it’s possible as well?  It is a thought.

Making a list of sights and historical interests helped prioritize the sightseeing schedule.  Most of the things that I really wanted to see were on the Hop-on, Hop-off city bus tour.  I studied the map provided and took advantage of the two day pass.  Palermo is quite a large city.  It would take three weeks to cover everything in the city.  Churches and food are the main attractions of Sicily, and I think Palermo has most of the churches!

The Royal Palace Palatine Chapel, Palermo is an amazing example of excess luxury and grandeur.  Located in the Royal palace in 1130 for Roger II, the saints surround Jesus Christ inside of the dome.  Gold and handmade ceramic tiles, made in Palermo adorn the walls and the floors.  Tiles were made from clay, which was formed into a tile, hand-painted and allowed to dry in the sun.  There were no machines that mass produced these tiles in the church.

Skills and labor were much different when this church was built.  Only a few certain families and artisans were picked to create the mosaics and gold-work.  Usually peasants held the most talent and skills for the task, causing problems of the society that lingers around the world today.

It is obvious that religion was the center of their universe.  I suppose having no internet, television, or any other modern conveniences that are available today held no distractions from their Pius duties.  Time and devotion went into the architecture of every church found in Palermo.  Great structures that survived two World Wars, and thousands of years give me an awareness of great awe and wonder.

Looking up towards the ceiling, it is a very intimidating project completed here.  Beauty and structure can exist at the same time, form over function does not apply here.  The Saints look down upon the many visitors that come into the chapel every day.

For some reason, I thought I had taken more photos of the chapel.  Then again, I was using four different cameras during the entire trip.  When I get the film back, there will be many more of this lovely Royal Palace Chapel.  Every inch of space is an object of great beauty and wonder.