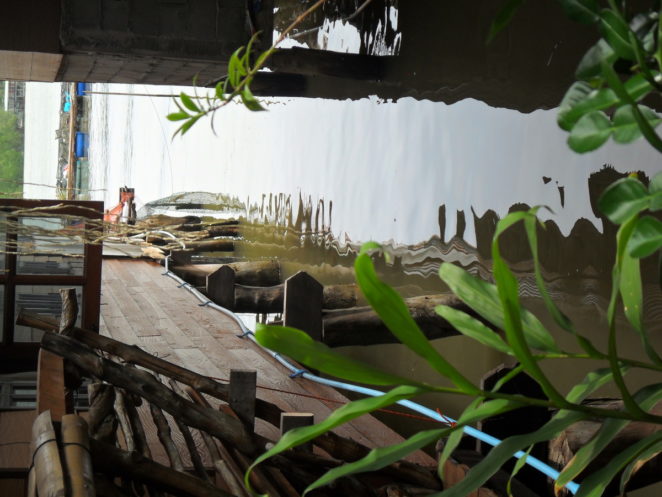 Ko Panyee is a fishing village in Phang Nga Province, Thailand, built on stilts by Indonesian fishermen. The population consists of 360 families or 1,685 people descended from 2 seafaring Muslim families from Java.

All of them are the descendants, directly or indirectly, of Toh Baboo and his family and friends, who were the first people to settle on Koh Panyee some 200 years ago.

Toh Baboo and two other families left their homeland in Indonesia by boat, to find a new place for living. The three families made a vow to each other that if one of them found a place where there were lots of fish and where everyone could live, that they would signal the others by raising a flag on a mountain as high as possible, so that the others could see it and join them.

Toh Baboo discovered the island with its abundance of fish and, true to his promise, raised a flag atop its soaring cliff, that is how the island got its name, Koh Panyee – the Island of the Flag.

Koh Panyee is about 20 minutes by long-tail boat from Surakul pier in Phang Nga province.

The ride which takes you past mangoves and amazing Limestone Karst’s rising majestically out of the sea is a wonder in itself.

This fishing village has a school, a mosque, a health centre and even a football pitch and the team is noted for beating teams from the mainland. I would say that you would become pretty good at ball control if you knew that if it was kicked off the pitch then it landed in the surrounding sea. The original pitch was built by a few lads who used driftwood in fact any wood they could  lay their hands on…they played in bare feet on a slippery surface. The one they have now is somewhat different to that first pitch but it is thanks to those boys that they have the one they have today.

There are also a few restaurants and the food is pretty good and the fish all freshly caught. Just look at those beautiful fresh prawns.

With fishing still being a large source of income men and women can be see going about their day to day life.

I hope you enjoy your day on Koh Panyee as much as we did it is very beautiful and the people are lovely.