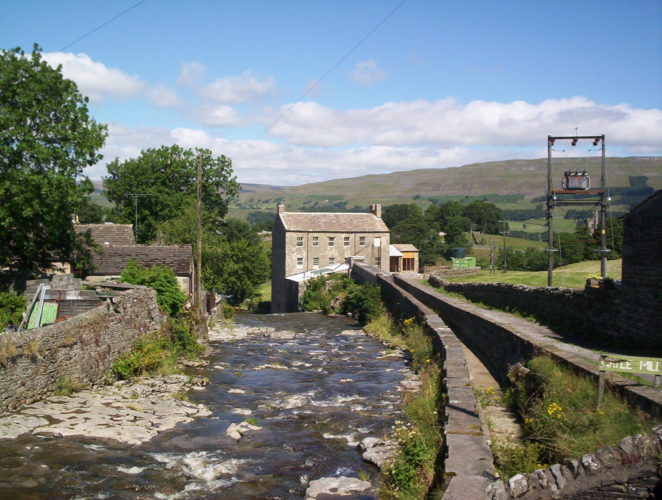 As a tourist attraction, Gayle Mill is a relative newcomer, but it can trace its origins back to the 18th century. Indeed, any American visitors might take note that, had it not been for their Declaration of Independence in 1776, the Mill might never have existed.

Gayle is a small village just up the road from the market town of Hawes, at the head of Wensleydale in the North Yorkshire Dales. Visitors to the creamery at Hawes, where Wensleydale cheese is made, can easily combine their visit with one to Gayle Mill, which is within easy walking distance.

However, due to the nature of the building, with its cramped spaces and narrow staircases, large numbers of people cannot be accommodated at the same time, so it is important to book a tour in advance. 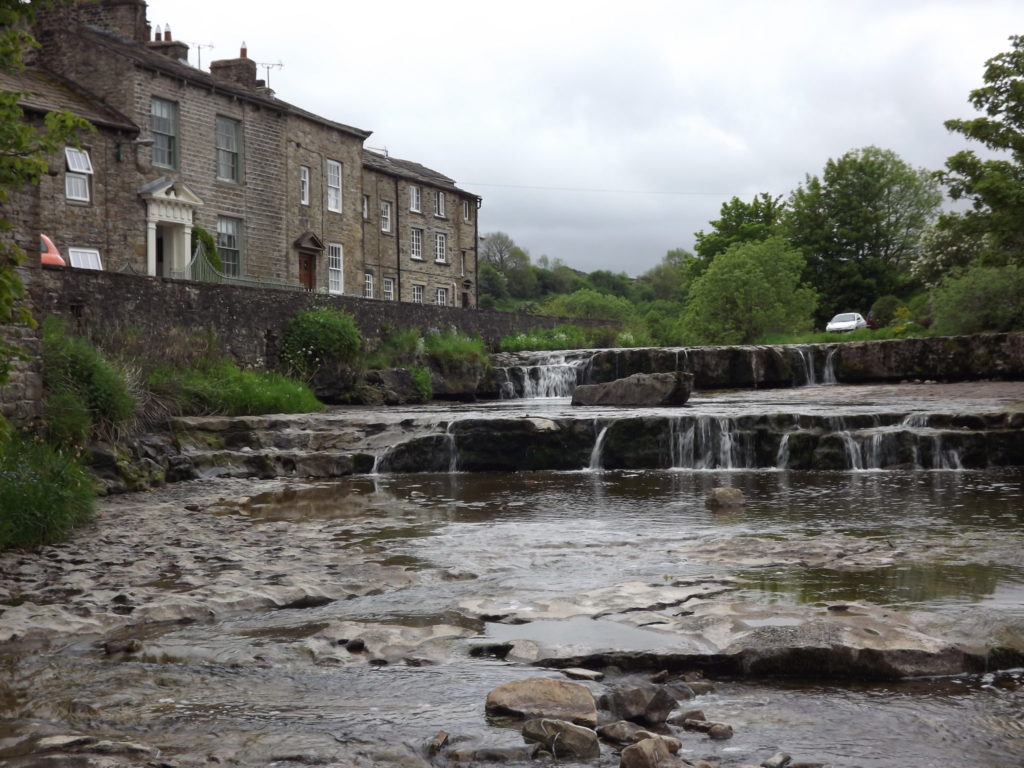 (Gayle Beck above the Mill)

The Mill is a substantial stone-built building, three storeys high, on the bank of the Gayle Beck, a fast-flowing stream that runs down to join the River Ure at Hawes. When first built in 1784-5, the water drove a wheel, but since 1878 it has been channelled to drive a series of turbines that power the machinery inside the Mill. One of these turbines is original, and is believed to be the oldest of its kind, still in working order and in situ, in the world. 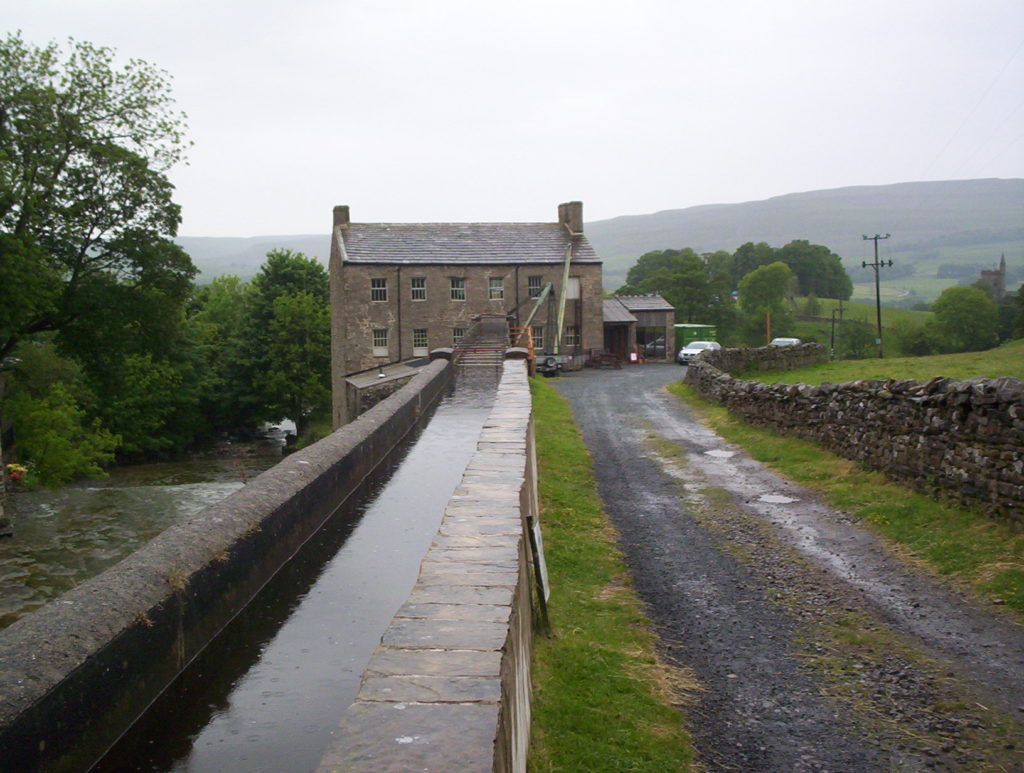 (Looking down the stone channel)

Despite being in Yorkshire, as opposed to cotton-spinning Lancashire, the original builders saw an opportunity to make money from cotton spinning at Gayle when the American War of Independence ended and plentiful supplies of American cotton became available. However, the inconvenience of transporting materials across the hills from the West, added to the efficiency of the burgeoning mills of Lancashire, led to Gayle Mill becoming first a flax and then a woollen mill.

The change from waterwheel to turbine power also saw a change of function, with Gayle Mill becoming a sawmill, to which function was added a range of woodworking facilities. For a period during the 20th century, the Mill also supplied electric power to the surrounding area.

When the last owner retired in 1988, the Mill ceased operations, but moves to convert it to housing were resisted. Instead, Gayle Mill slowly fell into disrepair until, in 2004, local attempts at restoration were boosted by it being featured in the BBC television series “Restoration”. Although the Mill only came third in the national contest to attract the funds on offer, sufficient interest had been aroused to make fundraising much easier, and four years of work began to bring the Mill back to life. The work continues, but the Mill is now at a stage where it can be operated as a going concern, both as a working sawmill and a visitor attraction.

As you walk down the lane towards the Mill, the first thing you will see is the channel that takes the water from the beck to the Mill. This is a stone trough at the top of the run, but the lower part is made of wood, supported on stone piers. The water is guided over a ten-foot fall to increase its speed over the turbines before it rejoins the beck.

A volunteer guide gives each group of visitors a short talk on the history of the Mill, then takes them down to where the timber is stored and seasoned, before showing them the turbines and turning one on to start the shafts and belts working. Visitors are then taken to where the machines, all of them original, use the power to cut and process the wood. On most visits, a short demonstration of a belt-driven lathe will be given, but on the first Sunday of each month visitors can see the sawmill and several other machines at work.

The Mill was used as a private dwelling during one part of its history, and was occupied during World War II by troops training for the D-Day invasion of Europe. Evidence of these uses is visible as you are shown round.

Gayle Mill is being used today to produce some of the same items that it would have done more than a hundred years ago, using the same machines, techniques and source of power. Although there is less need these days for cotton bobbins, horse-drawn farm wagons and milking stools, orders are being taken for garden gates and benches. At the top of the lane is a “Gayle gate”, specially designed with only a narrow gap at the base to prevent lambs from getting out of fields. 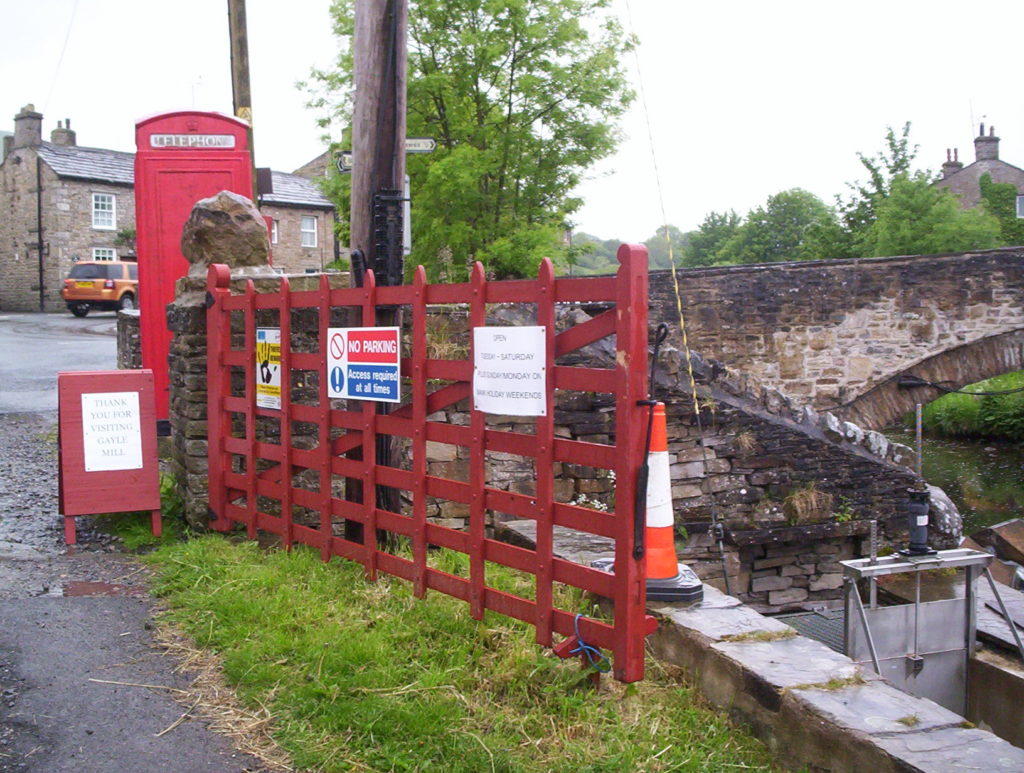 Profits from the admission fees go towards helping the restoration effort to continue. Your visit will therefore help future generations to see how some of our ancestors worked and produced items that were the mainstay of the local economy.