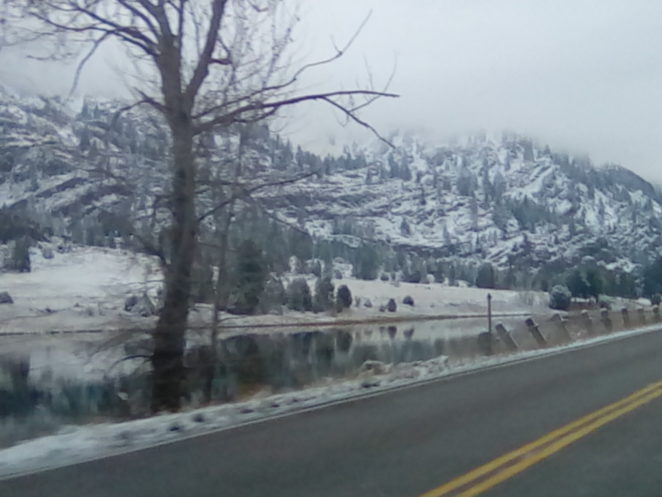 This is the second part of the series of pictures I took on the trip to Polson, Montana, on November 8. The first set of pictures I shared was for the first 15 or 16 miles of the trip. This group of images covers about the same distance, from where the last picture was taken to the little town of Dixon, just before the place where we turned down the road that goes by the National Bison Range and cuts across to the main highway that links Polson, Ronan, and Missoula.

This is after the first real snowfall of the year and for the most part, the clouds in this area were higher above us than in the last set. Some of them were even breaking up, giving us glimpses of blue sky and sunshine. Again, even if you visited Montana, you aren’t likely to see the area this way since it isn’t likely that you’d make the trip right after the first snowfall of the year.

I should mention that the outside air temperature for this entire trip was between 25 F and 30 F (-1 C and -3 C). The clouds that can be seen in these images are made of a combination of snow, ice crystals, and super-cooled water vapor that tends to freeze on anything it touches. At ground level, this would be ice fog.

This image, looking out over Flathead River, is taken from a series of curves that follow the river closely. The curves are known as the Perma Curves, named after Perma, which is basically a spot near the road. The line of posts that can be seen along the side of the road in this picture aren't traffic barriers, they are actually a fence that was erected around a strip of property that runs between the road and the river. The fields across the river often have elk, deer, bighorns, or an occasional bear, but to see them, a person needs to be very observant. They blend in well and on this trip, we didn't see any. 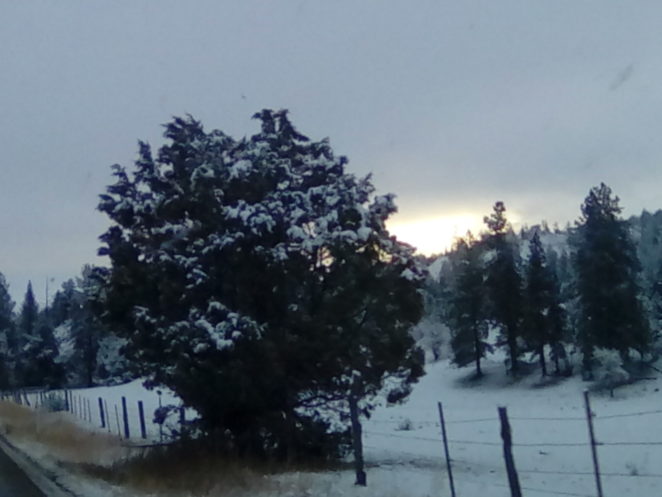 The valley starts opening up just as a person is coming out of the Perma Curves. In this image, the sun is trying to burn through the cloud layer. The picture shows the slight blanket of snow on the fir tree in the center of the frame. This is cattle country and it is the reason for the barbed-wire fence.

This sort of fence is common in this part of Montana and it consists of steel fence posts with wooden fence posts between them. The wooden posts add stability and are much cheaper, but wood eventually rots, so an arrangement like this allows for the fence remaining erect even if one of the wooden posts rots and breaks off. In years past, steel wasn't used and if a few posts broke, the fence in that section would collapse. Cattle could then escape the enclosure. This made it necessary to constantly patrol the fenceline by horseback, a job called 'running the line'. Needless-to-say, this wasn't a good job in the middle of winter. 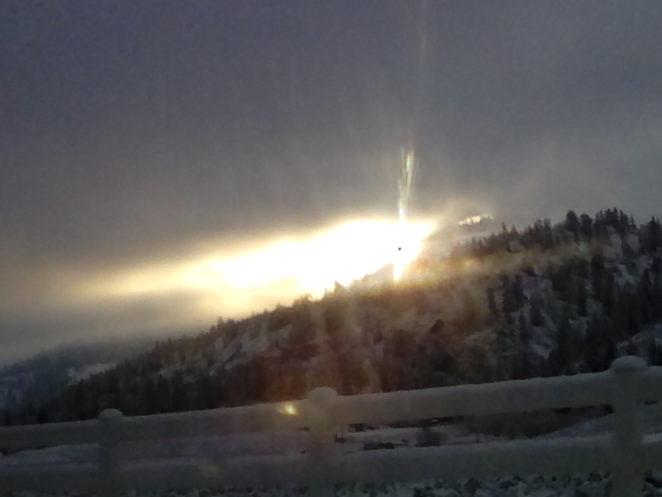 In this image, the sun is trying to burn through the clouds. The clouds are actually not as dark as they appear in the image. They are light gray. However, the camera tried to compensate for the brightness of the sun by dimming the whole picture. If the sunlight broke all the way through, this picture would probably be nearly black.

The wooden fenceline in this image is more for show than for function. This ranch is beautiful and carefully manicured because it is owned by a number of wealthy people who come here for vacations. It is sort of a high-class dude ranch. The ranch is also currently for sale, if someone has $3 million in loose pocket money. 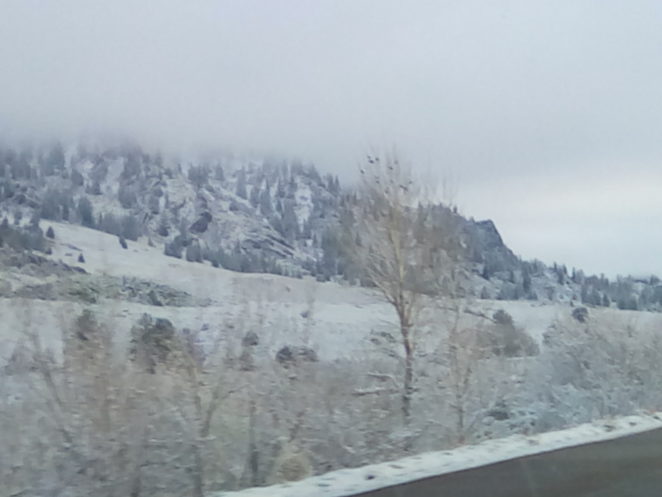 Here is the image a little farther down the road than the last one, pointing in the other direction. This the actual color of the clouds that looked so dark in the last image.

Most of what can be seen here in the foreground are bushes that are covered with a dusting of about a half inch of snow. The tall, slender tree near the center is a chokecherry. The fields that are beyond the trees and bushes in this image are actually on the other side of Flathead River. The distance to the base of the hill in the middle of the picture is about three-fourths of a mile, to give a perspective. 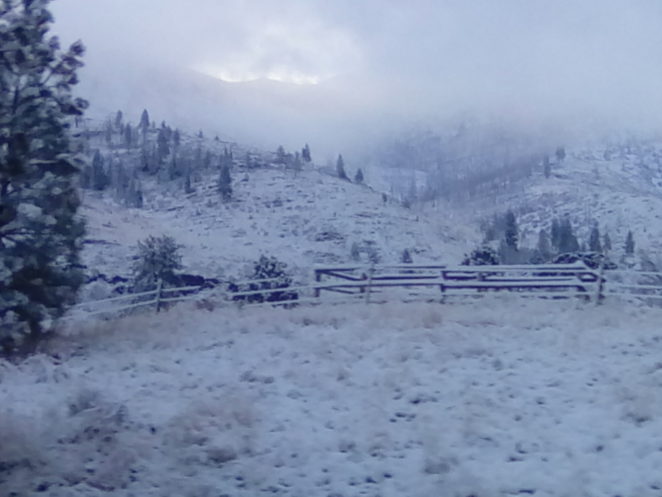 This is facing away from the river and it gives a hint as to the amount of snow that fell in this area. The wooden fence is about 125 feet away and there is about an inch and a half of snow on it. The Ponderosa Pine tree on the left is only about a decade old, but it offsets the fence nicely.

There is a tiny patch of blue sky peeking through the clouds above the gullies in the middle of the picture. 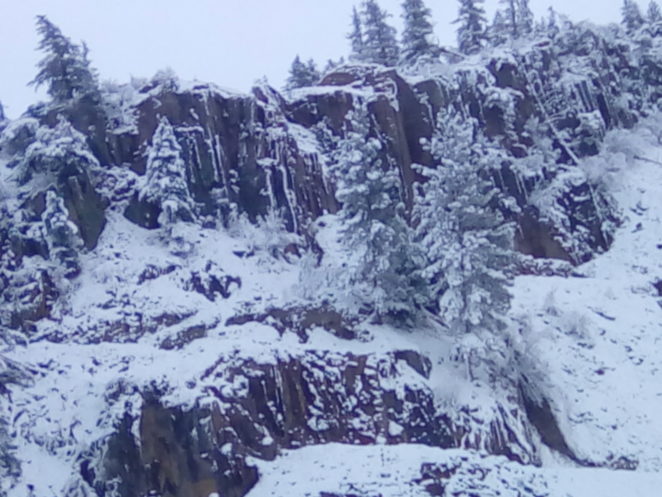 This image is of the hillside about a mile farther down the road. Because of the snow, the nearly-verticle bands of slate can be seen on the cliff faces. Before the Rocky Mountains began the period of uplift, the rock was horizontal and at the bottom of a vast inland sea that covered most of what is North America now.

The fir trees in this image are only about 50 feet tall, but they are probably 75 to 100 years old. For a fir tree, that is old. The trees in the background are almost twice as tall but are quite a bit younger. That is because they are growing in soil and don't have to attempt to get nutrition from almost bare rocks. 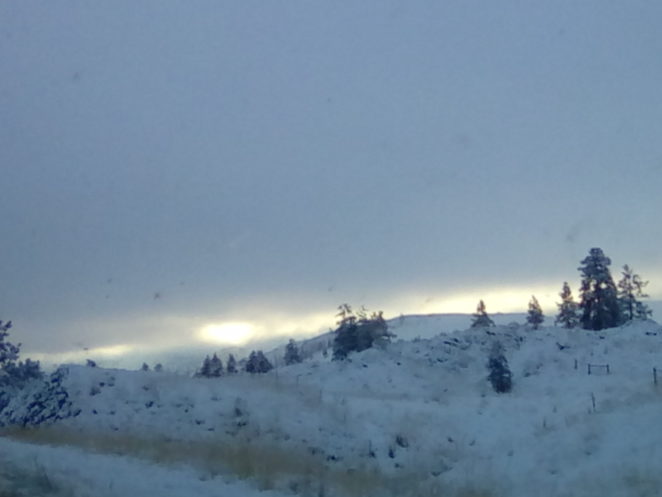 The stark beauty of these little hills is highlighted by the ribbon of light clouds immediately above the hills. Again, the sunlight makes the clouds look darker than they really are. To get an idea of the distances in this picture, the fence posts that can be seen just below middle-left are each protruding about five feet above the ground. The distance to those fence posts is about 175 yards. 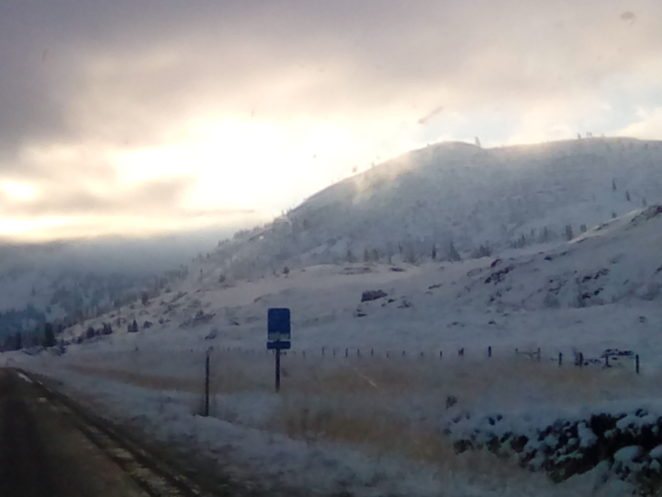 The sun is breaking through in a big way and a small amount of blue sky can be seen above the hilltops. Even though the temperatures are below freezing, the road in this area is wet rather than being icy. In fact, in places, there is standing water.

I suspect that this would have been drop-dead gorgeous a half-hour later, when the sun fully illuminated the snow on the hills. It would have been blindingly bright, but beautiful anyway. 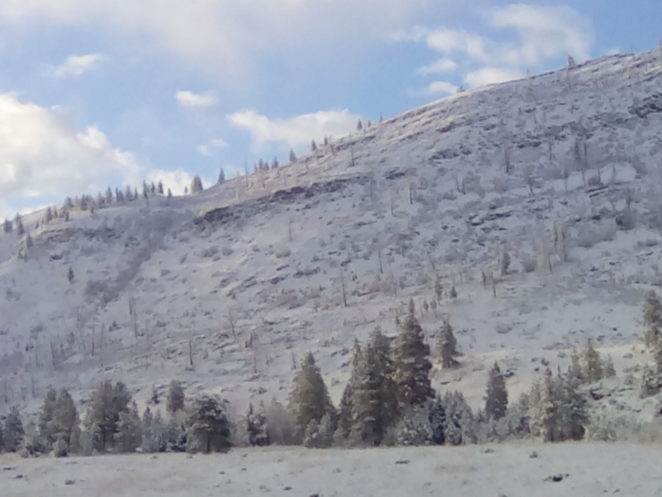 Before we quite reached Dixon, we saw this beautiful blue sky. This is the same rift in the clouds that was shown in the last image, but from a different angle and farther down the road. The sunshine is still not fully shining on the ground, except in a couple of small spots near the top of the ridge, but since the sun is to our left and slightly behind us, the clouds look white.

This ridge runs down toward Dixon, ending just south of the town. 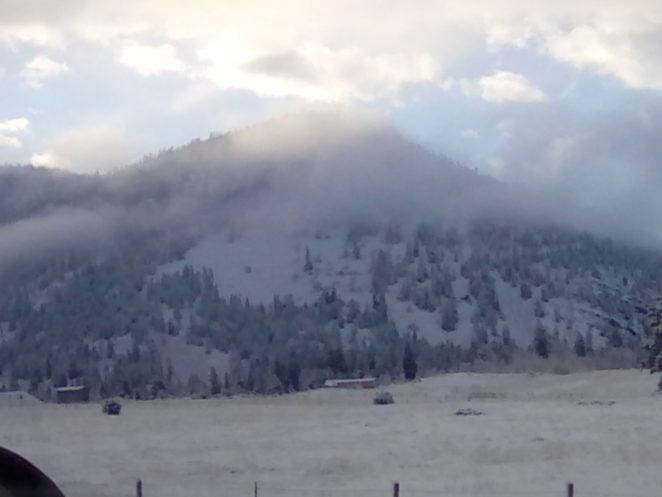 I'm not sure why this image ended up so far out of sequence, but in the first two images, I made mention of the Perma Curves, which are named for the "town" of Perma. A person would actually be hard pressed to call Perma a town, but this is it. It consists of a tiny general store, two houses, a trailer house or two, and a school bus. (I don't know the story behind the school bus.) This image shows the store on the left and the school bus in the middle of the frame. One of the houses is just behind the school bus. There is blue sky here, too, and the clouds are moving virtually the same direction we are going.