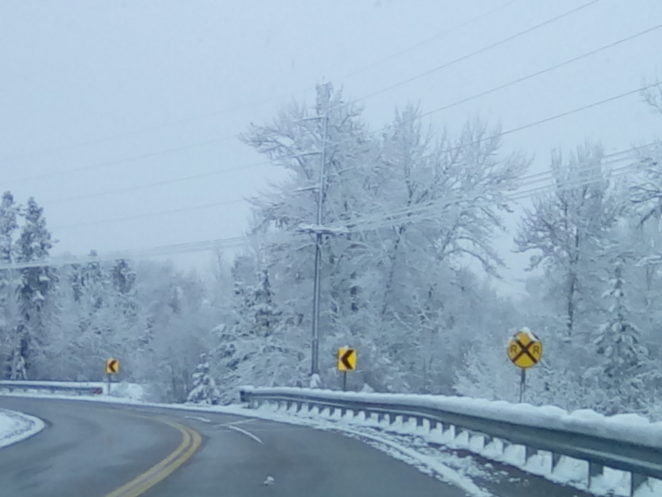 I’ve shared images that were taken right after our first snow, on our journey from home to Polson, Montana. The first set was from our town to the Perma Curves. The second set covered the distance from the Perma Curves to the town of Dixon, Montana. Those to segments covered about 30 miles. This group of pictures covers the rest of the way to Ronan. I realized belatedly that I didn’t take pictures from Ronan to Polson.

This segment of the journey took the most time to make. That isn’t because of the distance and it wasn’t even because of the snow and ice, though there was more of both. Rather, we had to slow way down because of the ice fog. Through much of the last segment, the clouds were at ground level and at times the ice fog was so dense that the visibility was about 50 feet.

Unlike a lot of people in other states (apparently), we don’t drive very fast in the fog. A child, adult, car, truck, dog, cat, deer, elk, bison, or steer in the middle of the road would be bad news, even at 40 mph. The speed limit over most of this part of the trek is 65 mph, but only an idiot would drive that fast in fog this dense. There are also a number of sharp curves on the road and with thick fog, it would be very difficult to navigate them.