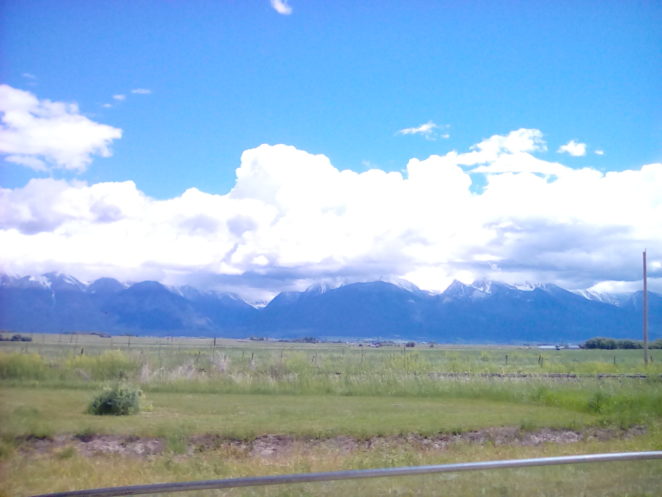 I have written a few articles about Montana and I decided that it might be neat to share a few pictures that were taken about a week ago on a short trip to Polson, Montana. The distance is only a little more than 140 miles, round trip. Since the trip was a short one, we didn’t stop along the way. All of these pictures were taken from the car as we were moving at around 70 miles an hour. If you notice any blurring, that is the reason.

Along the way, we saw a bison, a bald eagle, a Cooper’s hawk, a prairie falcon, two large wild hen turkeys, and deer, not to mention cattle and horses, but I wasn’t able to get a picture of any of them. I didn’t have the Kindle ready when we saw them and when you are traveling 70, you don’t have a great deal of time to take a picture of things like that.

However, I was able to take pictures of the mountains and the weather. These are the Rockies and part of the Continental Divide. This section of the Rockies is called the Mission Mountains. Storms were moving through, so the mountain tops are in the clouds. The clouds were fast moving and it was windy, with the temperatures only reaching the mid-60’s late in the afternoon, on the way back. This has been an unusually cool and damp June here, a lot like the year before last, but it does make for some beautiful mountain views. By this time last year, most of the snow was gone from the mountains.