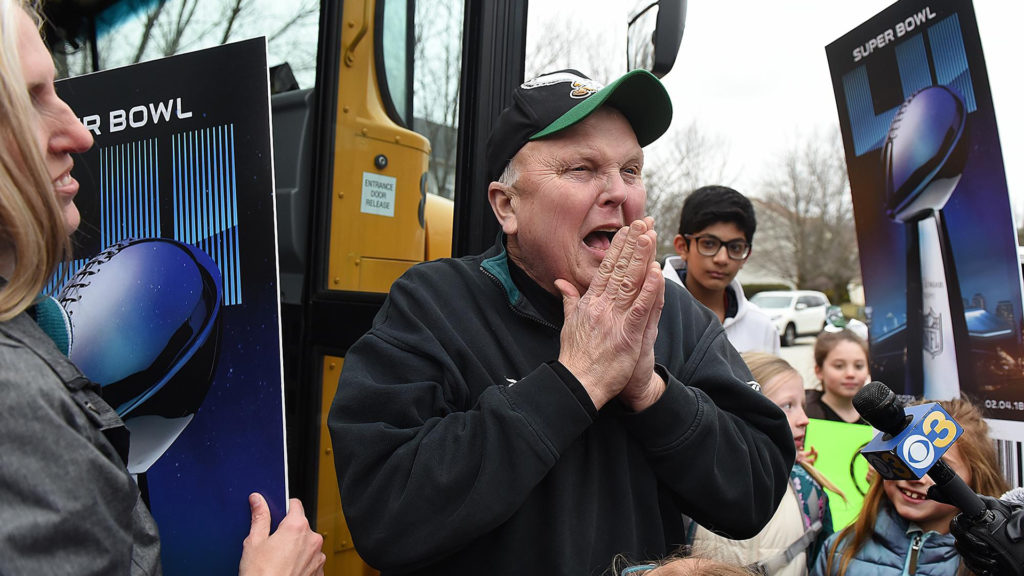 Gary Kelmer who is pictured is a bus driver in Mount Laurel New Jersey and his wife were bestowed by parents Amy and Izaak Smith who raised more than $5,000 dollars so that Gary and his wife who are huge Philadelphia Eagles fans the dream of their lifetime to attend Super Bowl LII in person at the U S Bank Field in Minneapolis Minnesota on Sunday February 4, 2018.

Gary who is a bus driver in Mount Laurel is considered one of the good guys in the community by doing his duty of driving students to schools and back home safely was rewarded for his kind work by receiving tickets to the Big Game, football jerseys and airfare to see a huge sporting event that is huge in America as well as worldwide.

The Philadelphia Eagles will attempt to win their National Football League Championship of any kind since 1960 when they defeated the Green Bay Packers at Franklin Field in Philadelphia Pennsylvania which was the only championship game that the late Vince Lombardi ever lost as the coach of the Packers during his tenure with the Packers as their head coach from 1959-1967.

What makes this story great is the ticket prices to attend the Super Bowl are very steep for the average football fan since the city that hosts the Big Game has to recover the money that they spent to host the game.

It goes to show you that no good deed that anyone of us ever do will be repaid down the line. The Eagles will be taking on the defending Super Bowl Champions the New England Patriots in Super Bowl LII.

In the words of the late actor Burgess Meredith who played the role Mickey Goodmill who was Rocky Balboa’s boxing character in the movie “Rocky II” when he yelled inside a hospital when Adrian gave Rocky her blessing after the birth of her son Robert Balboa Junior to take on his boxing opponent heavyweight champion Apollo Creed “What are we waiting for? Tickets!”