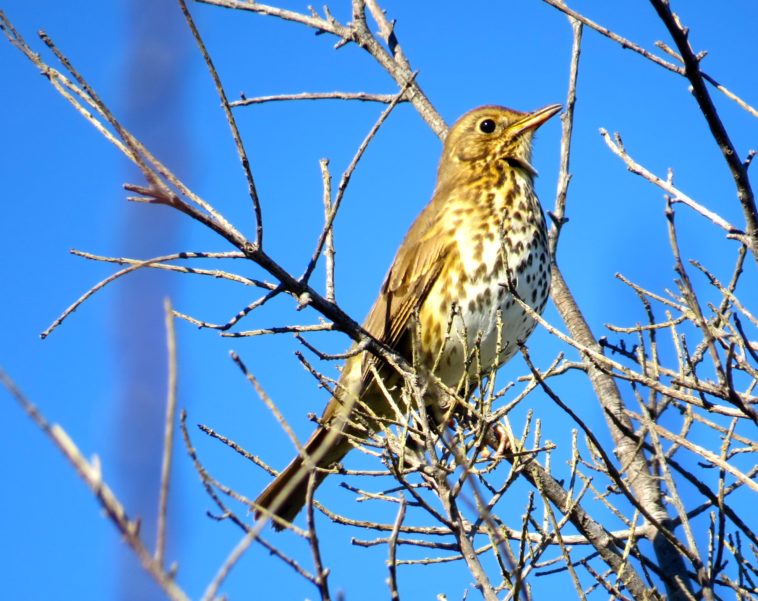 This is New Zealand’s Song Thrush, and it’s a European Immigrant but lived long enough in New Zealand to become part of the furniture!

The little Song Thrush is a great friend of the gardener. It eats garden pests, like slugs, snails, worms (although earth worms are also a gardeners best friend), insects.

Our birds are endangered by other animals such as cats. The cats catch anything that moves. Domestic cats make great pets, but they kill birds and you can’t get a cat to change it’s nature.

The birds are wary of these predators. However, the cats often kill birds like the thrush.

The bird, especially a Song Thrush, is a nervous creature and it can easily die of shock, it can have a heart attack from sheer fright. So it’s important with an injured bird, you don’t move suddenly, keep it warm and in a dark place. Get it to a bird rescue place as soon as you can and although there are no guarantees. These people will give their all to give the bird the best care they can. The bird rescue places rely on donations from the public. Often the main care giver of the bird rescue place doesn’t even get a holiday.

However, when bringing in a damaged or abandoned bird fledgling, the bird rescue people will put that bird in with other bird fledglings of the same age and the fledglings help each other to heal. They are dependent on being fed every hour until a certain time when they can get their own food.

The Song Thrush is a beautiful bird that sings it’s heart out in the morning and in the evening and at times during the day.

Yes, there is another thing to watch, that when you weed the garden, any slug bait you put in must be non toxic to a bird. The birds will often eat slug pellets and be poisoned. The best ones are the blue ones so they don’t eat them. Birds don’t like blue slug pellets.

Birds will often watch gardeners and come behind the gardeners to eat worms, bugs, spiders, snails, slugs and anything they can get. They often eat left over fruit in the compost garden as well.

The only thing that gardeners don’t like is when the birds eat their fruit on the trees and strawberries. You can cover strawberries with bird netting or else hang up unused CDS or DVDs as they shine and put them off from eating it, and even small bells or wind songs will put birds off.

Over all birds like this Song Thrush are a gardeners best friend, so it may pay to leave putting down slug bait or pest poisons until the birds has gone through the new garden with new plants.

If you feed birds, don’t give them bread by a pond. The bread goes off in the pond and poisons everything in it including the birds. Try to give them wild bird seed instead if you are going to feed them. 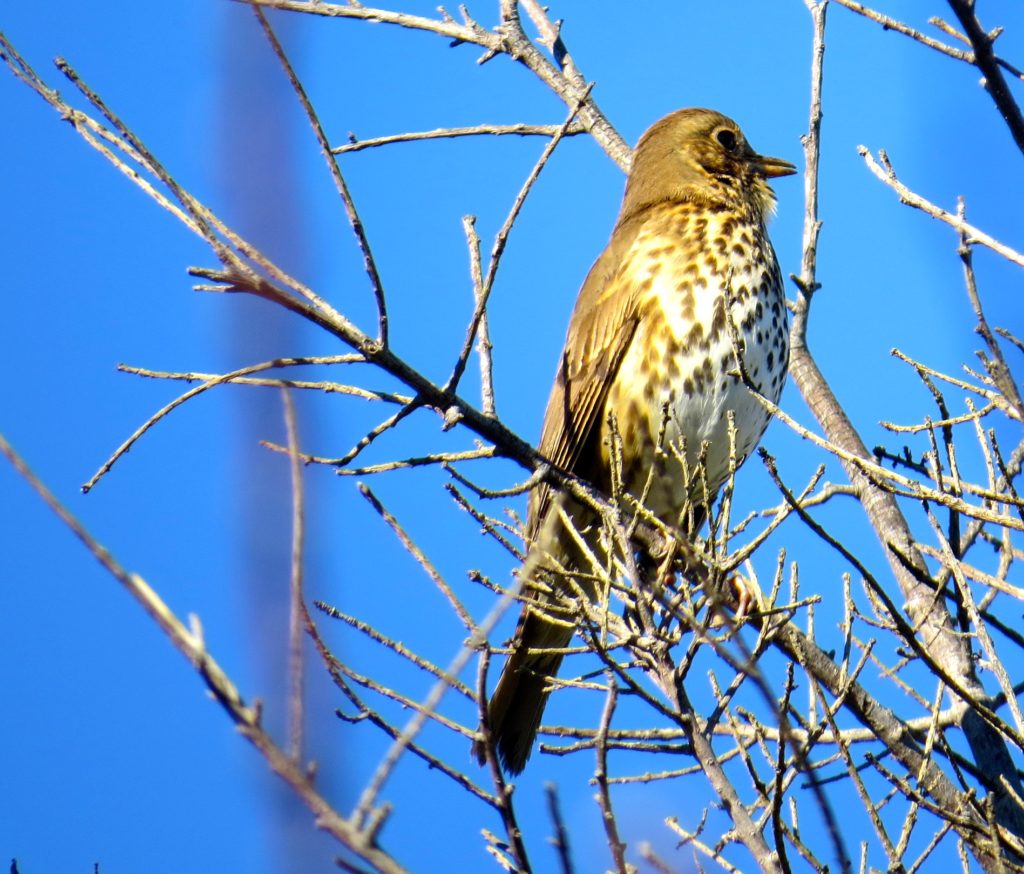 It likes to be heard, not seen 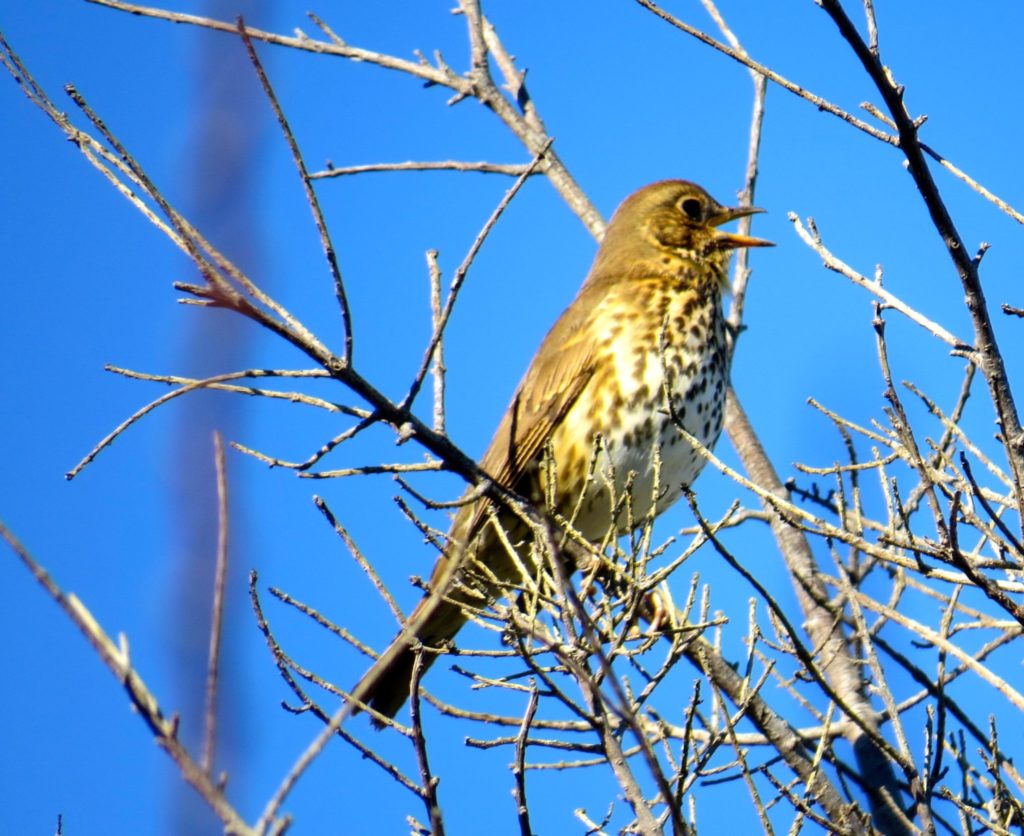 Here it is seen by me, giving it’s ten cents worth 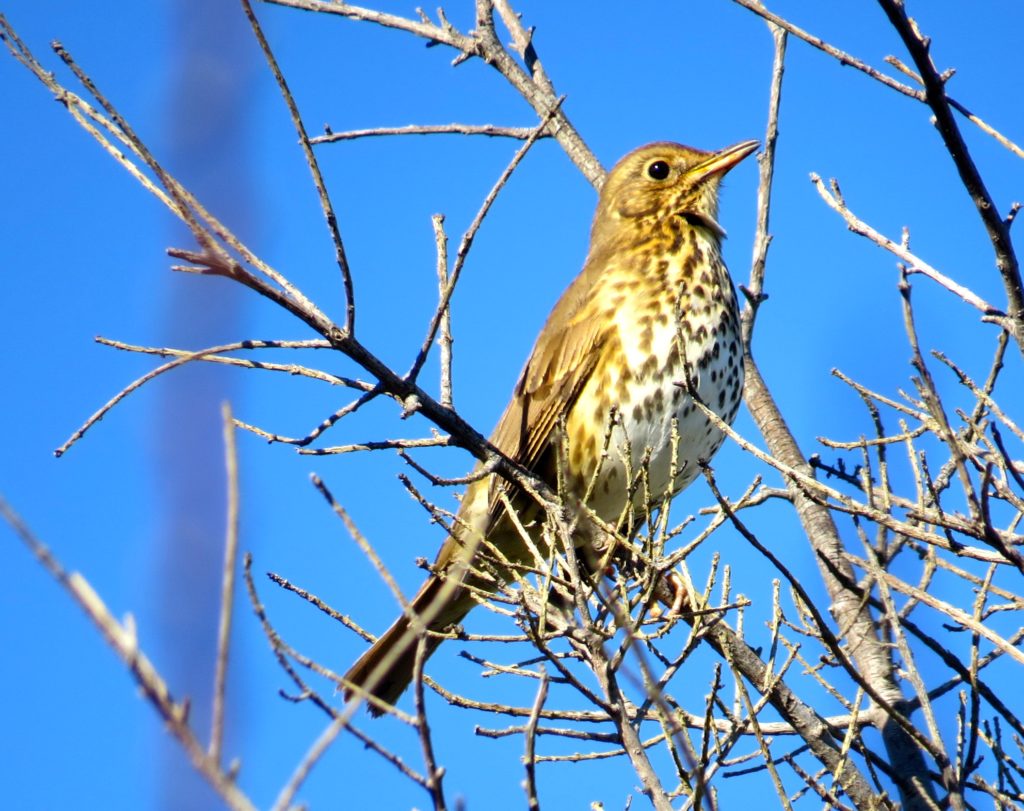 The Thrush sings the same tune twice. but try not to let it know that you are watching it. Otherwise it will fly away.