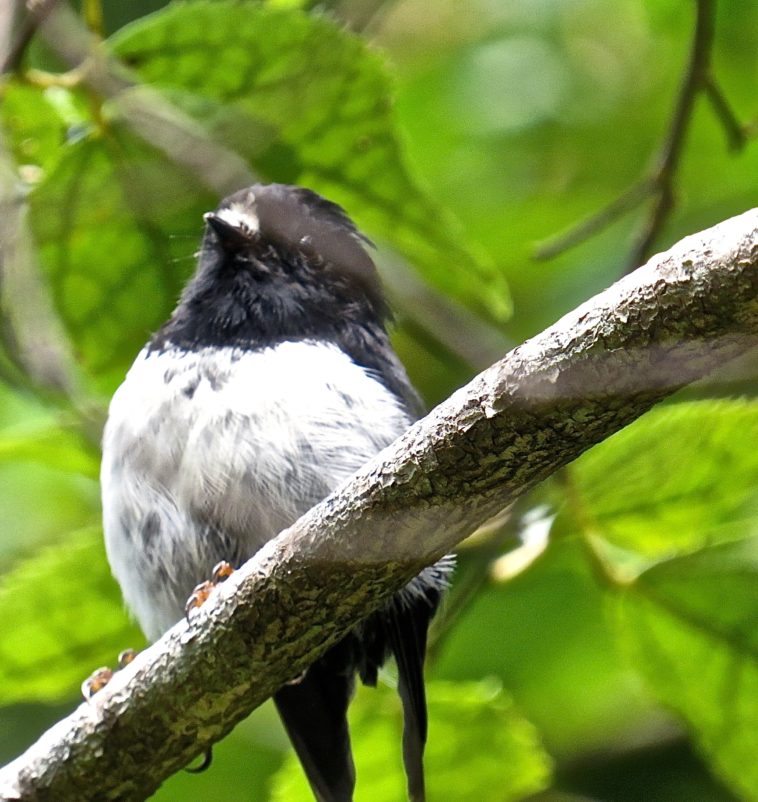 This is my photo of a New Zealand Tom Tit. I took his photo and did not expect to see one. I went to a place called, “Ark in the Park”, Cascades, Waitakere Ranges, Auckland, New Zealand. The Tom Tit is an endangered species and I’ve seen just this one. He is a very tiny bird, not large. There are five species of Tom Tit in New Zealand. As I’ve never seen one before this time, I would say he is a definite endangered bird.

This bird inhabits native New Zealand forests and scrub land. Males are largely black and white and females are brown and white. I was fortunate to see this at all, as often you can not find them only hear them singing.

The females are a duller brown than the stark male Tom Tit. This Tom Tit is obviously a male. The length of the Tom Tit is 13 cm and their weight is 11 gm.  A lot smaller than my budgie.

Both sexes make, “Seet”, “Zet” or “Swee” contact calls throughout the year , up to five in succession. Full song is given to adult males, throughout the year, except the moulting season (February to April). The song is rendered as, “ti-oly-oly-oly-ho”, and lasts 2-3 seconds. Also gives a downscale tone, a series of, “Chuck” sounds which starts in rapid succession and finish slowly. Downscales are sometimes given after a neighbour has given such a call or as a response to robins.

Well, I saw this little bird on a branch over my head on a walk towards the Cascade Falls. Unbeknown to me, the Falls were blocked off by many rocks and you have to climb several difficult rocks to get to the falls. I could do that normally but can’t do that until my ankle heals from an injury.

I have yet to gain the opportunity to view these birds but hope to make it to a bird sanctuary soon. There is no guarantee of which bird you can find.

This little guy was obviously very busy preening himself. I don’t think he was doing it for humans but preening is essential to birds for survival and keeps them healthy.

I’m certain he was aware of our presence but here he does not look at us directly as it he is making an important decision.

I think he is checking his situation every few seconds. While silently observing a few watching humans.

It’s clear the Tom Tit has enemies, predators and he needs our help to survive. New Zealand has introduced animals since the Maori’s arrival and next the arrival of the European. As with them the Maoris brought the rat and a dog. After that, the Europeans brought, farm animals, horses, cows, sheep, goats, pigs, rabbits, ferrets stoats, weasels, the Australian Opossum, some deer and cats and dogs, mice and more rats.

Today New Zealand has firm guidelines on what you are allowed to bring into New Zealand. That doesn’t just extend to creatures but insect and plant life as well. We have a unique environment and it needs protection.

The female raises her eggs on her own and she is very vulnerable to predators. They have a habit of having shallow cavities for their nest and they are not always able to escape when a predator enters the nest.

Tom Tits can be found all over New Zealand. They are not easy to find.