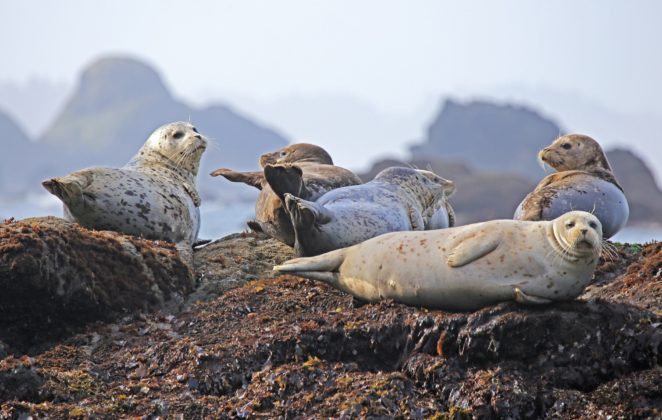 The relatively small islands of Great Britain can boast a coastline that stretches for more than 10,000 miles due to all its “ins and outs” and the huge number of even smaller outlying islands. The coasts therefore provide environments for a variety of sea mammals, especially in the more remote areas where food is plentiful and human interference less so. Mammals that can often be seen from the shore, or better still from a boat, include:

Male seals can reach 8 feet in length although the females are smaller. As might be expected, they have dark grey skin but have patches that are light grey or brown. During the breeding season, which is late autumn and early winter, huge numbers can be seen in many locations around the coast, such as the Farne Islands of Northumberland where up to 6,000 individuals congregate. At other times they can be seen resting on remote beaches. The British Isles are home to about half the world’s population of this species.

The common seal is smaller than the grey seal, with males being up to about six feet in length. The skin colour is lighter than that of the grey seal, being greyish brown with darker spots, and the face strikes the viewer as being generally “friendlier”, although the appearance of a smile on its features cannot be taken as meaning anything in human terms! It is also known as the harbour seal, and individuals can sometimes be seen in harbours and inlets with the head bobbing in the water. It is also seen basking on sand banks and mudflats with head and tail raised off the ground.

Also known as the harbour porpoise, this is the smallest sea mammal seen in British waters, at around five feet in length. It is dark grey above and light grey below, and can be distinguished from the dolphin by its blunt head, lack of beak, and triangular dorsal fin. It swims in family groups but individuals are often seen on their own. The south-west coast of Wales is a good place to see them.

This is the sea mammal that most visitors to Britain’s shores want to see as it swims at speed just ahead of motor boats or leaps spectacularly out of the water. Its reputation for friendliness is greatly helped by its smile-shaped snout, but it does indeed seem to enjoy human company. Dolphins grow up to nine feet in length and have athletic, streamlined bodies that are generally grey but with a lighter underside. They have pointed dorsal fins, the rear edge of which is curved in a sickle shape. Whether the snout is really shaped like a bottle is a matter of opinion, but it is certainly distinctive. Dolphins fish in groups, and a gathering of gulls overhead is often a good sign that dolphins are around.

Whales are far less commonly seen than seals, porpoises or dolphins in British waters, and unfortunately this happens most often when individuals or small groups become disorientated and beach themselves on the shore. However, one species that is seen quite often, especially around the northern and western islands of Scotland, is the minke. It is up to 28 feet long, with a dark back and lighter underside, including a light grey stripe across the flippers. It is a baleen whale, which means that it takes food, including krill and small fish, by straining seawater through bony plates across the mouth that act like a comb. Minkes are usually seen alone but groups may be seen as they migrate between their breeding and feeding territories.

This is by no means a complete list of cetaceans that are seen in British waters, as more than 20 species of whale, dolphin and porpoise are either natives or regular visitors. These include the massive fin whale (up to 80 feet long) and the orca, which gains its unfortunate alternative name of killer whale from its predation of smaller sea mammals such as porpoises and seals.

Mention might also be made of the sea otter (Lutra lutra), as it is a mammal that is often seen on Scottish coasts where it hunts for fish and plays among the rocks. When the water is calm, an otter will lie on its back eating its latest catch. However, this is the same species as the animal that is seen on inland rivers throughout Great Britain and should therefore be described as a “mammal that lives by the sea” rather than a “sea mammal”.

A visit to the British coast, especially away from the main population centres, is usually a rewarding one in terms of wildlife sightings. Sea mammals can be particularly impressive, although it should always be remembered that one is there to observe and not interfere. Getting too close to a seal colony, for example, can be dangerous and is not recommended. These are wild animals that have every right to be where they are and to continue their lives undisturbed by gawping tourists.