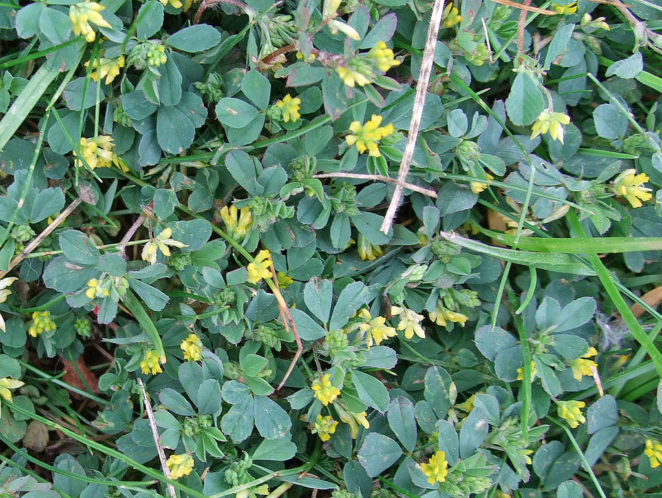 Lesser trefoil (Trifolium dubium) is one of several wildflowers that has been suggested as the original “shamrock” used by St Patrick to explain the nature of the Holy Trinity (three in one, one in three) to the people of Ireland. A direct translation of “seamrog” is “little clover”, which could describe a number of plants, so the claim of lesser trefoil must be set alongside those of white clover, black medick, wood sorrel and even watercress.

Lesser trefoil is commonly found in most parts of Great Britain, the exception being northern Scotland. It is a plant of pastures and grassy banks. It is a low-growing downy plant that can reach a height of 20 inches (50 cm). It flowers from May to October.

As the name suggests, lesser trefoil has leaves that divide into three leaflets. The many flower-heads produce anything from ten to 25 tiny yellow flowers, the narrow upper petals of which have their sides folded together. When the flowers die, the petals do not fall from the plant but remain attached as covers for the straight brown pods that contain the seeds. These look a bit like the heads of hops, which is why lesser trefoil is counted as a “hop trefoil”.