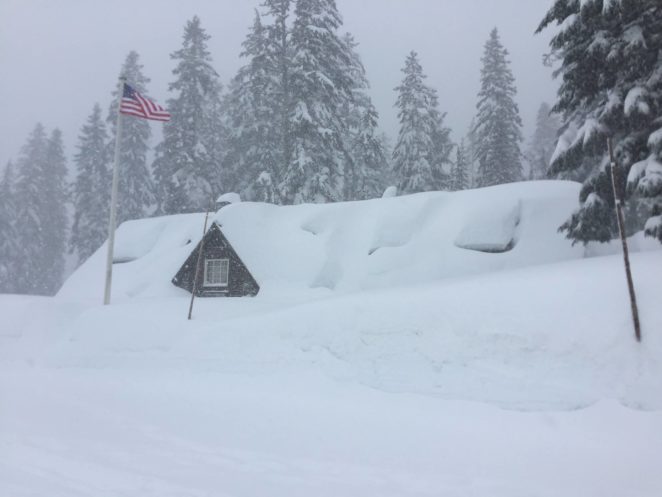 A poll that I wrote today got me to thinking back about fond memories of Crater Lake, in my youth. Since some people have never even been to the park, I thought it might be neat to share some pictures from so long ago. Some of my memories are still so vivid that it is hard to realize that they happened about half a century ago.

The park is different now. Oh, it is still a beautiful place to visit and it will always be ‘home’, as far as I’m concerned, but back then, there was a feeling of family for everyone who lived there year-round. That is lacking now and that is really a pity. Those were great times.

This was the administration building back then. It is now the information center at the park. As a guess, I'd say that this picture was taken in November because the snow isn't deep yet. This is the building where I went to school for the first couple of years and the room we used is just to the left of the visible apex, which is actually the entryway.

This is the building that was built to house the school and recreation rooms. It is quite a bit bigger than it looks and is a two-story structure. The school was upstairs and the rec-rooms were downstairs. This picture was taken in 1967 and that dish antenna is an 8-foot dish.

The rec-rooms were used primarily to welcome a new park employee or to bid farewell to one who was moving away, usually to another park. When that happened, a potluck banquet was generally held in the rec-rooms, with all of the families contributing to the feast.

The log that can be seen on the ground was a standing hemlock tree when we first started using the school. It was immense and the log has a diameter of a little more than six feet. It was cut down for safety reasons since they were concerned about it falling over and squishing one of us kids. I don't think it would have as it was very healthy, but it provided additional "playground equipment". We played on that log about as much as we used the swing that is in the picture.

Behind this building, through the trees, the cliff faces of Garfield Peak can be seen. My brother used to love free-climbing that cliff and the top of it is at the backside of the Crater Lake Lodge, up at the rim...about three miles by road from where this picture was taken. 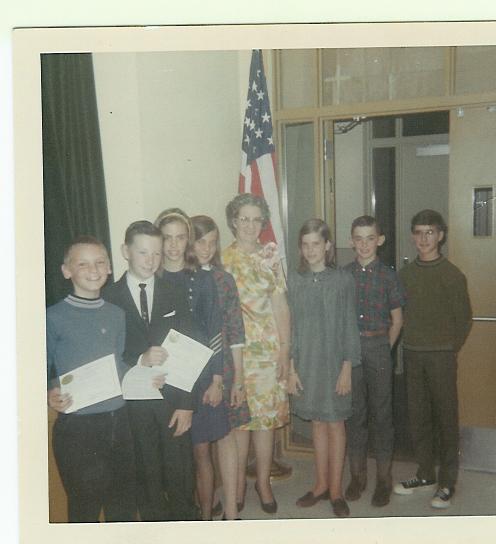 This is a picture of our 6th-grade graduation from Crater Lake Community School. This is the entire 6th-grade class at Crater Lake. I'm at the extreme left, holding my diploma and a scholastic award. I believe that this was taken in May of 1968, so I would have been 12. I began 1st-grade when I was 5-years-old. 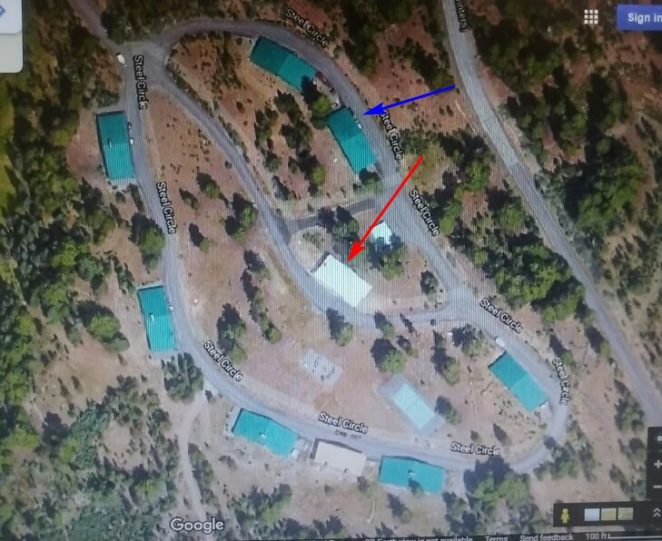 There are some changes from when I lived there, though. For one thing, there used to be a lot more trees everywhere. For another, the school is no longer a school. The kids that live there now are bussed the 42 miles to Chiloquin to attend school. That means catching the bus at about 7:00 each morning. In the winter, the trip to Chiloquin can also be very treacherous, with all the snow and ice, and sometimes the trip takes more than two hours.

Incidentally, all of the green rooves of the duplexes weren't there back then. The buildings were flat-topped, on purpose. The weight of the snow is tremendous and the buildings are made of I-beam reinforced concrete and brick. They would plow the snow off using bulldozers. As heavy as bulldozers are, they weighed less than the snow. The rooves you see in the picture are made from high-grade steel, to withstand the weight. Back in the 1960s, when these buildings were built, it would have been far too expensive to have thick steel pitched rooves.

My dad and his crew built all of the paved roads that can be seen in this picture. The Admin building I've already shared is north of this image, about an eighth of a mile. 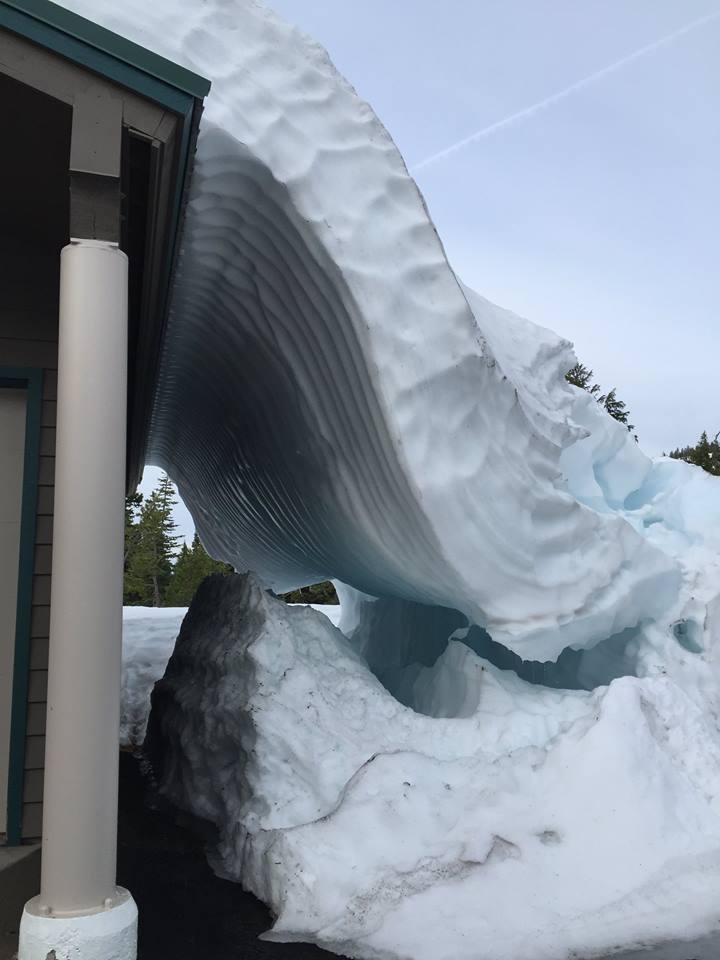 I don't believe that this was taken at Crater Lake, but it is a good representation of what it looks like as the snow gradually melts off of the pitched rooves up there. The biggest difference is that the residences there are mostly two-story buildings and the snow is thicker, easily reaching the ground as it melts off. It was common to have the snowbanks all the way up to the second-story windows.

I apologize for the poor quality of the image, but this image is of a nude woman that is hewn out of a volcanic boulder. It is found behind the current administration building at Crater Lake, and there is a cool story that goes along with it.

When the first construction was being done at Crater Lake in the early 1900s to make the park accessible to the public, workers would sign up for 6-year stints to work there. The only companionship any of the men had was other men who were also working there and they weren't allowed to leave and come back. All six years were spent at the park, gruelingly working. It was rather like being in the military, except that it was considered to be too dangerous for women to be there and there wasn't a way to go to where there were women, which wouldn't have been allowed anyway.

One young man was very much in love with a young woman, but he didn't have enough money to feel worthy of asking the woman to marry him. So he signed up for a tour of duty at the fledgling Crater Lake, even knowing that he wouldn't see his lady for 6 long years. As hard as the work was, it did pay well.

He missed her terribly, though, so he did the only thing he could think of. He was not a trained sculptor, but he took a hammer and cold chisel and started gradually chipping away at a lava boulder. What you see is the result of 6 years of painstaking effort; a sculpture of his beloved.

To complete the story, in his last year at the park, the man wrote a letter to the young woman, asking her to marry him. He had little hope of a good response. She was quite beautiful, after all, and he hadn't actually told her why he left to work at Crater Lake until he did so in his proposal letter.

It took months for his letter to reach the woman and more months for her response to reach him. She was as heartbroken as he was and her emphatic response was 'Yes!"

After he was discharged from his duties at the park, he made his way east, back home, and the two were married. From what can be pieced together, they lived happily ever after, though that isn't certain. Still, that is supposed to be a true story.

As kids, we used to spend hours every spring, removing the fir needles and dirt from the Lady of the Woods, though we were the only ones who ever visited her. The Park Service keeps her clean now and tourists do take the walk to see her, sometimes. She is a labor of love.